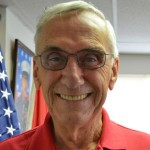 USMC - Retired, Chairman of the Advisory Board

Bob is a distinguished Marine Corps aviator with worldwide service. He is a recipient of the Defense Distinguished Service Medal; the United States’ highest non-combat related military award. Serving in the Republic of Vietnam he received the Distinguished Flying Cross, 15 Air Medals and the Bronze Star.­­

His assignments included; Assistant Wing Commander; Assistant Chief of Staff for Plans and Policy for Naval Striking Forces Southern Europe, Naples, Italy; and Commanding General of a Marine Expeditionary Brigade of over 14,000 Marines. He was Commander of Landing Force Training Command at Coronado when retiring in 1992.

Get Involved and Help Us Preserve USMC Aviation History

Subscribe to receive our news, events and updates.
*We will not share, rent or sell your information