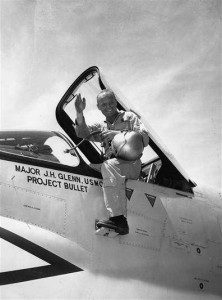 Significant accomplishments in aviation and astronautics during the mid-1950s and early 1960s were regarded as major news events. This was certainly true on July 16, 1957 when Senator (then Marine Major) John Glenn became a national hero by setting a new transcontinental air speed record.  On that day, Major Glenn flew an F8U-1P Crusader (BuNo 144608) from NAS Los Alamitos, California nonstop to NAS Floyd Bennett Field, New York at a record speed of 725.55 mph. The flight lasted just three hours, 23 minutes and 8.4 seconds, which beat the previous record holder (an F-100F Super Sabre) by 15 minutes. In total, four pilots would break the transcontinental air speed record in 1957.

John Glenn’s record setting flight was certainly not a publicity stunt. The purpose of the Project Bullet flight was to prove that the Pratt & Whitney J-57 engine could tolerate an extended period at combat power – full afterburner – without damage. After the flight, Pratt & Whitney engineers disassembled the J-57 and, based on their examination, determined that the engine could perform in extended combat situations. Accordingly, all power limitations on J-57s were lifted from that day forward.

On July 16, 1957, Major Glenn secured his place in aviation history and became an inspiration to thousands of young people in the United States. Project Bullet secured his reputation as one of the country’s top test pilots. He was awarded his fifth Distinguished Flying Cross and, shortly thereafter, was named to NASA’s first astronaut class.

Unlike John Glenn, few pilots have had an opportunity to break or set significant aviation records. Undoubtedly, these aviators have a “special spot in their heart” for the aircraft that helped them obtain their place in history.

Although John Glenn’s accomplishments as a Marine aviator are well documented, little is known about the subsequent history of the Crusader flown on that record setting flight in 1957.

Here is the rest of the story…

Glenn’s F8U-1P Crusader remained in active service but was re-designated as an RF-8G. At some point after the flight, a small brass commemorative plaque was affixed to the port side of the aircraft. Over the next several years, Glenn received notes from aviators who had flown it. As time went on, Glenn started hearing stories of the demise of the Crusader. One story had it that the aircraft was shot down over Vietnam. Another stated that it was damaged during a carrier landing in the Indian Ocean and went over the side.

The “damaged on landing” story comes the closest to the truth. Commander Tom Scott (USN, Retired) was the last pilot to fly Major John Glenn’s Crusader. Commander Scott provided the following account of the demise of this historic aircraft.

Commander Scott began his Naval aviation career in 1965 as a F-4B Phantom back seat RIO. In 1969, Scott received his pilot wings and flew A-4’s and F-8’s. In May 1972, Scott’s unit (Light Photographic Squadron VFP-63 Det-4) acquired Glenn’s Crusader from the aircraft bone yard at Davis-Monthan Air Force Base. The Crusader was fitted out and returned to active duty in short order. Scott first flew it May 12, 1972 at NAS Miramar. On May 18th, he flew it to the USS Oriskany (CVA-34) during work ups for the pending West Pac cruise. The USS Oriskany arrived in the Gulf of Tonkin and air combat operations began in June.

On Friday December 13, 1972, then Lieutenant Scott launched on a flight over North Vietnam. In general, it was an uneventful flight. Scott conducted his mission as planned and then returned to the Oriskany for landing. Little did he realize that his day was about to get really exciting!

Due to poor weather and rough seas, Scott’s first attempt to land failed to catch the arresting wire on the flight deck. With the flight deck rising and falling in a fairly consistent cycle, Scott set up for a second approach to the ship. However, passing over the stern of the ship, the cycle unexpectedly reversed and Scott’s aircraft hit the flight deck’s round down belly first which tore off the right main landing gear. The plane then bounced up and came down on its nose before bouncing back into the air where Scott fought to keep it under control with one hand on the stick and the other ready to pull the secondary ejection handle between his legs.

With calls from the ship of “eject, eject, eject” exploding in his helmet, Scott pulled the ejection handle but initially could not over come the resistance of the handle. He tried again with all his strength to eject. Giving everything he had, Scott was finally successful ejecting out of the cockpit, as his aircraft passed the ship’s island.

The parachute opened and Scott thought with a little luck, he might land on the deck. However, common sense kicked in at that point. He said, “I realized that if I missed the deck, I could crash into other deck equipment or other jets on the flight deck. Neither of which seemed acceptable.” As Scott guided his parachute away from the carrier in preparation for landing in the Gulf of Tonkin, he inflated his flotation device. Scott hit the water hard ripping his hands from the parachute koch fittings. He was now being pulled face down in the water by the chute. With great effort, Scott managed to release himself from the chute as it pulled him closer to the Oriskany.

As soon as Scott felt he had everything somewhat in control, he looked up to the ships rescue helicopter coming for him. The helicopter hovered near and lowered a rescue crewman to within approximately 20 feet from where Scott was located. As luck would have it, this was the crewman’s first in-water rescue. Fortunately, the crewman was young and a good swimmer and soon made it to Scott. At this point, he realized that his rescuer forgot his personal flotation device. The inexperienced crewman became fatigued and was actually holding on to Scott to remain afloat. Unfortunately, a single flotation device was not sufficient to keep both men on the surface.

While Lieutenant Scott and the rescuer decided who was to rescue whom, the helicopter crew was dealing with their own problems. The intercom between the pilot and the hoist operator at the door was not working. The pilot had no idea where to go or even if the downed pilot was aboard. However, after considerable effort, the flight crews finally lowered the rescue harness and passed over Scott a few times until both men were able to grasp the harness and were hoisted aboard the chopper.

After any aviation accident, an investigation is conducted and an incident report completed. As a result, Scott learned that the secondary ejection handle should been normally be set to 20 about pounds of pull. However, Scott believed that the ejection handle in his Crusader may have been set at about 100 pounds of pull as was the case on several of the F-8’s aboard the Oriskany. He commented, “This was well out of the tolerance limits for that aircraft.”

Scott lamented the loss of this historic aircraft.  However, he was grateful that he was able to overcome the ejection problems and did not do down with the aircraft. Certainly, this series of events was fortuitous for other aviators that flew the F-8s that may have had ejection handles incorrectly set to 100 pounds. Scott believed a loss of an aircraft could have positive result in that other aircraft and pilots could be saved by the corrective actions taken as a result of the loss. Unfortunately, in this case, it had to be John Glenn’s record breaking Crusader that was lost.