Farewell to the Phrog 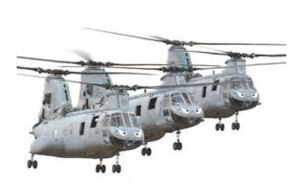 After more than 50 years of service, the United States Marine Corps is retiring the CH-46 helicopter (nicknamed the “Phrog”).

Colonel Fred Allega (USMC-retired) will share some of his experiences as a pilot of the iconic helicopter and other aircraft he flew.

Colonel Allega served for 30 years in the Marine Corps including two combat tours in Vietnam.  He has a total of 4200 flight hours including 1500 in the CH-46 helicopter.

During his career, he was awarded two Distinguished Flying Crosses and 27 air medals.

In 1981, he was recognized as the Marine Aviator of the Year.

At the end of his talk, Colonel Allega will give tours of the CH-46 helicopter on display at the Flying Leatherneck Aviation Museum.

During his career, Colonel Allega was assigned to the following CH-46 squadrons:  HMM-361, HMM-265, HMM-262, HMM-165, HMM-163and HMX-1.  Additionally, he served a tour in VT-2 as a T-28 Flight Instructor,   During his HMX-1 tour, Colonel Allega served as a Presidential Helicopter Aircraft Commander for Presidents Richard Nixon and Gerald Ford.

Colonel Allega’s command billets include Commanding Officer HMM-163 (“Evil Eyes”) and  Commanding Officer, Marine Aircraft Group 16.  In 1981,  LtCol Allega, was selected as the Marine Corps Aviator of the Year and received the Alfred A. Cunningham Award from the Marine Corps Aviation Association.  Simultaneously, his squadron HMM-163, was awarded the MCAA Marine Medium Helicopter Squadron of the year.

His Love of Aviation Continued into His Career in Private Industry

Colonel Allega retired from the Marine Corps in 1990 and joined Mercury Air Group Inc.  As Executive General Manager, he directed corporate/airline fueling and monitored aircraft maintenance operations at Los Angeles (LAX) International airport.  As the Director of the Western Region, Allega directed Fixed Based Operations (FBO) for Los Angeles, John Wayne, Ontario, Burbank, Bakersfield, Fresno and Reno airports.  The facilities under his responsibility dispensed over 100-million gallons of jet fuel per year and provided airline turnaround maintenance for 400 aircraft per month.  During his tenure, Allega participated in the acquisition and consolidation of four additional general aviation businesses. He retired from Mercury Aviation in June, 2006.