Picnic With A Pilot: Dan King

The Flying Leatherneck Aviation Museum launched its first “Picnic With A Pilot” series June 8, 2013 during Open Cockpit Days. The first amazing pilot featured in the series was Distinguished Flying Cross, CWO-3 Dan King. He has an amazing story – with 1600 combat flying hours, 825 combat missions and was shot down three times! 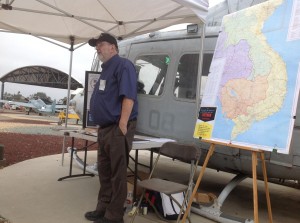 King flew a number of aircraft during his time in Vietnam, including the OH-13, Huey UH-1 D/H Slicks and UH-1 B/C armed gun ships.  He has 700 training hours and general flying assignments; and 1,600 Combat Flying Hours

The “PICNIC WITH A PILOT” presentations held are during open cockpit days. The presentation lasts 30 – 45 minutes with a 15 minute Q&A period. Pilots are asked to discuss anything memorable from their career.

For more information or for media coverage, contact media@flyingleathernecks.org.