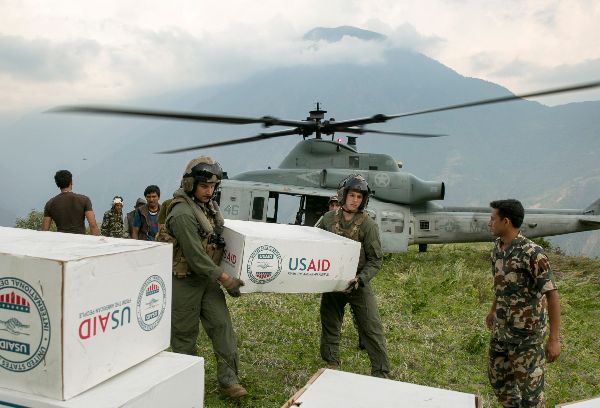 Aviation Heritage Professor and author of “High Flight”, George Haloulakos, spoke to a very enthusiastic crowd at the museum on July 27, 2019.  Below is a summary of his lecture about the humanitarian missions that the USMC has completed making use of some of the unique capabilities of its aircraft.

Corps’ Aviation: The “Nine-One-One” US Military Unit and its Humanitarian Relief Operations (HRO)

By George A. Haloulakos, MBA, CFA

Marine Corps aviation, (the “Nine-One-One” unit of the United States military) due to its rapid deployment capability, has a long tradition of conducting humanitarian relief operations both at home and abroad. There are numerous examples of Marine Corps involvement in humanitarian and disaster relief operations. Among there are the 1989 San Francisco Earthquake, Hurricane Hugo (1989), Southern California Wildfires, the Tibet and Haiti Earthquakes (2008 & 2010 respectively), as well as many other similar situations occurring in both peacetime and wartime.

The acronym HRO — for Humanitarian Relief Operations — is synonymous with “Heroes” because of the uncommon valor and expeditionary nature associated with Corps aviation. Vertical envelopment – a tactical maneuver in which troops are either air dropped or air landed, attack the rear and flanks of an opponent force, thereby cutting off or encircling a force – is crucial to fulfillment of HRO. For a humanitarian mission, vertical envelopment enables Marine aviation units to bypass difficult terrain or conditions to deliver assistance and aid to remote, distressed areas. In many situations, this is exemplified by the vertical or short takeoff and landing (VSTOL) capability of its helicopters.