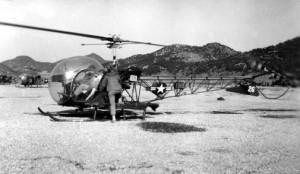 Thanks to the opening credits of the long-running television series “M*A*S*H,” a helicopter delivering wounded men to a field hospital remains one of the most enduring images of the Korean conflict. The aircraft featured on that show was a Bell Model-47, the same type flown by the Marines under the designation HTL and by the Army and Air Force as the H-13.

The Model-47 first flew in 1946, was granted the first ever U.S. commercial helicopter license in 1947, and remained in production for almost 30 years. Military versions saw extensive service in both Korea and Vietnam, and several generations of naval aviation helicopter pilots learned to fly using HTLs. Early model HTL-2 trainers used at Lakehurst Naval Air Station, New Jersey, mounted wheels instead of skids and were covered in fabric when the first Marine trainees learned to fly rotary-wing aircraft. The Chief of Naval Operations designated the HTL as the prospective observation helicopter in 1949. The press of combat operations in Korea, particularly the need for a more suitable aerial medical evacuation platform than the HO3S, led to a massive influx of HTL-4s to Marine Observation Squadron 6 at the end of 1950.

The unique technical feature of all Bell helicopters was a two-bladed rotor and stabilizer system that reduced flying weight without harming performance, and the unique visual feature of the HTL was its clear Plexiglas “goldfish bowl” cabin canopy that allowed all-round vision. The HTL-4’s squat configuration and skids allowed it to land in rough terrain while the inclusion of two exterior stretcher pods made it the preferred aircraft for field evacuations of seriously wounded men. Unfortunately, it had an unreliable engine and a notoriously weak electrical system that together required inordinate maintenance time while its limited fuel supply severely reduced the helicopter’s combat radius.

Several generations of naval aviators learned to fly using HTL trainers, and the Bureau of Aeronautics eventually purchased more than 200 HTLs, the last of which were still regularly flying more than two decades after the first one took to the air. Advanced versions of the HTL developed into the UH-1 Huey and AH-1 Cobra, the utility and attack helicopters that arm today’s Fleet Marine Forces.