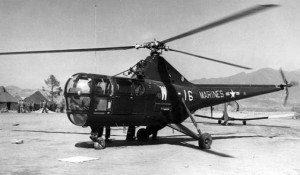 The Sikorsky HO3S-1 was the first helicopter assigned to the U.S. Marine Corps. The HO3S was the naval variant of Sikorky’s model S-51 commercial helicopter. Despite its observation designation, the HO3S was actually a utility aircraft used for a variety of roles. Among the 46 conceptual uses initially listed by Marine Corps Schools were the ones most used in Korea: search and rescue; aerial reconnaissance; medical evacuation; and liaison. The U.S. Air Force flew the  same aircraft as a search and rescue helicopter designated H-5F.

The HO3S was the lineal descendent of earlier Sikorsky designs, the initial HNS trainer and the first designated military observation helicopter (alternately known as the HO2S in naval service and the R-5A to the Army). The HO3S featured a more powerful engine that gave it added lift and an increased payload. During the immediate pre-war period, the HO3S proved to be an outstanding rescue craft that often utilized its winch to pull downed pilots out of the water. Likewise, the HO3S was an excellent observation platform for artillery spotting.

In Korea, its primary uses were as a liaison aircraft and as an aerial ambulance. A first-rate liaison aircraft with good range, the HO3S had a dependable engine, and was rugged enough that it required relatively little maintenance when compared to other rotary-wing aircraft of the day.

Even though the HO3S performed yeoman service at the Pusan Perimeter, it had significant shortfalls as a combat aircraft. The tricycle landing gear and its high center of gravity made the HO3S unstable on all but flat solid terrain; the aircraft could not accommodate interior stretcher loads; its lack of back-lit instrumentation precluded extended night and bad weather operations; and the high engine location made aircraft maintenance difficult. Another major drawback was that it required a great deal of strength and endurance to handle such a heavy aircraft for an extended period without servo-controls. In addition, the single main rotor and long tail assembly combined with a centrally located engine mount often required field expedient ballast adjustments to maintain in-flight stability, so it was not unusual for pilots to keep several sandbags or a sea-bag filled with rocks in the cabin.

Lift: Pilot plus two passengers or about 500 pounds of