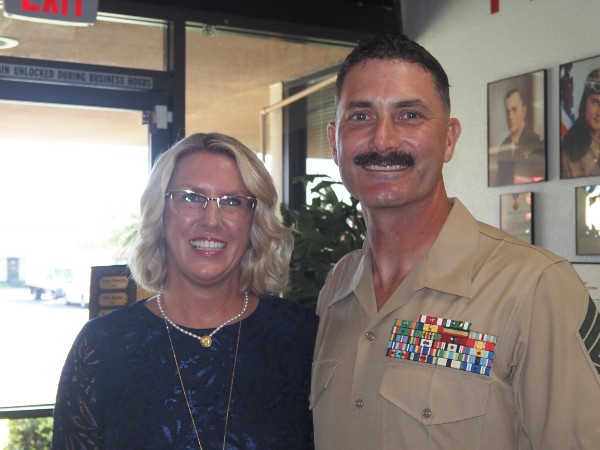 Kyp Hughes was named the 2022 recipient of the Irene Ferguson Marine Wife Recognition Award in a plaque unveiling ceremony at the Flying Leatherneck Historical Foundation offices on August 20th. This annual award recognizes the wife of an active-duty Marine for her outstanding service to the U.S. Marine Corps, community, nation and family.

Kyp has served as a full-time Deployment Readiness Coordinator for both the 11th and 13th Marine Expeditionary Units based at Camp Pendleton. Her passion for the welfare of Marines and Sailors attached to the MEUs provides needed support for activity duty personnel and their families during deployments, various family challenges, holidays, community events and much more.

Major Ferguson created the award to honor the life of commitment and sacrifice made by Marine wives in support of their husbands.

“I realized that in all the museums I had visited, all the parks I had walked through, and all the buildings I had been in, none included a tribute honoring the life of commitment and sacrifice made by service wives in support of their husbands.”

Throughout Major Ferguson’s career, his beloved wife of 64 years educated, cared for, and soothed the fears of his sons while he was gone.

“And all without medals or monuments to attest to her trials, tribulations, and victories. This Award is long overdue to recognize the Marine spouse. My generation gave these wives too little recognition.  It’s time to change that.”

Friends and family members of Marine wives based throughout the Southwest region submitted nominees to the Flying Leatherneck Historical Foundation.  The Irene Ferguson Marine Wife awardee was then chosen by an all-female committee that included awardees from previous years and the granddaughter of Irene Ferguson, the award’s namesake.  Members of Yorba Linda Adoption Committee nominated Kyp for the honor.

Nominations for the 2023 award will open starting in January 2023.

For more information about the award and citations for current and past awardees, please click here.