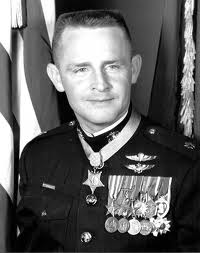 The President of the United States takes pride in presenting the MEDAL OF HONOR to:

for service as set forth in the following CITATION:

The President of the United States of America, in the name of Congress, takes pleasure in presenting the Medal of Honor to Major Stephen Wesley Pless (MCSN: 0-79156), United States Marine Corps, for conspicuous gallantry and intrepidity at the risk of his life above and beyond the call of duty on 19 August 1967, while serving as a helicopter gunship pilot attached to Marine Observation Squadron SIX (VMO-6), Marine Aircraft Group THIRTY-SIX, First Marine Aircraft Wing, in action against enemy forces near Quang Nai, Republic of Vietnam. During an escort mission Major Pless monitored an emergency call that four American soldiers stranded on a nearby beach were being overwhelmed by a large Viet Cong force. Major Pless flew to the scene and found 30 to 50 enemy soldiers in the open. Some of the enemy were bayoneting and beating the downed Americans. Major Pless displayed exceptional airmanship as he launched a devastating attack against the enemy force, killing or wounding many of the enemy and driving the remainder back into a tree line. His rocket and machinegun attacks were made at such low levels that the aircraft flew through debris created by explosions from its rockets. Seeing one of the wounded soldiers gesture for assistance, he maneuvered his helicopter into a position between the wounded men and the enemy, providing a shield, which permitted his crew to retrieve the wounded. During the rescue the enemy directed intense fire at the helicopter and rushed the aircraft again and again, closing to within a few feet before being beaten back. When the wounded men were aboard, Major Pless maneuvered the helicopter out to sea. Before it became safely airborne, the overloaded aircraft settled four times into the water. Displaying superb airmanship, he finally got the helicopter aloft. Major Pless’ extraordinary heroism coupled with his outstanding flying skill prevented the annihilation of the tiny force. His courageous actions reflect great credit upon himself and uphold the highest traditions of the Marine Corps and the United States Naval Service.