How I represent Honor, Courage and Commitment by Chloe Ellermeyer 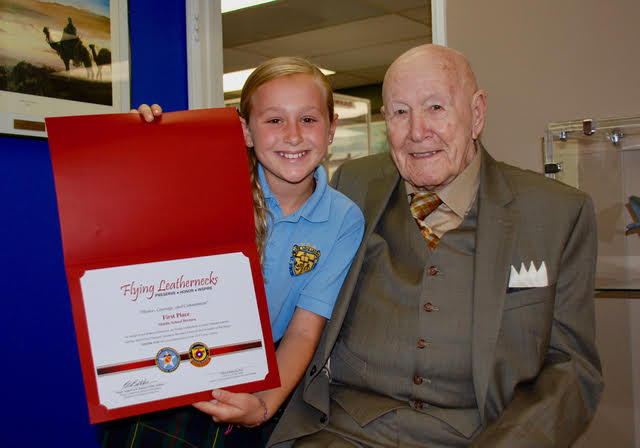 The 30th President of the United States, Calvin Coolidge said, “No person was ever honored for what he received. Honor has been the reward for what he gave.” Honor can be shown through honesty and your integrity. Members of our armed forces show honorable behavior by helping other people before they help themselves. In soccer, you can show your honor by taking responsibility when you make a mistake and by being a good leader for your teammates. For example Blaine Lee said “The leader who exercises power with honor will work from the inside out, starting with himself.”

Courage means to have strength when you are faced with challenges. People who have courage stand up for what they believe in even if they are scared. Captain Eddie Rickenbacker, who was awarded the Medal of Honor said, “Courage is what you’re afraid to do. There can be no courage unless you are scared.” Courage is persevering through tough situations and sticking to what you believe in and not questioning your ability. I think members of the military define the word courage, especially those who have gone to war. To leave your family and not know if you are going to get hurt or killed takes courage. Our military can do this because they believe that we live in a great country and they want to protect that, even when they are scared. In my own life, I show my courage through soccer. I am the smallest girl on my team and I play with girls that are taller and weigh a lot more than me. I’m a defender, so when I defend, I am scared sometimes, but I try to have courage, believe in my abilities, imagine I am the biggest girl on the field, and do my best to shut the other team down. My favorite quote about courage is by Chae Richardson, “Courage is not living without fear. Courage is being scared to death and doing the right thing anyway.” That’s what courage means to me.

Commitment is putting in the work even on days you don’t feel like it. Vince Lombardi once said, “Most people fail, not because of lack of desire, but because of lack of commitment.” Members of our armed services exhibit commitment every day, by putting themselves in danger and not backing out because things get difficult. Commitment is a big part of my life. I am committed to school and to soccer. I joined a travel soccer league at the end of last year. Before I get in the car, I figure out what school work has to be done and bring it with me. I know that I can study while my parents are driving, so I plan ahead because I am committed to school. I train with a trainer on ce a week because I am committed to my soccer team and to getting better. I don’t always want to study or train, but I do it because it is important to me. This is what commitment means to me.

John Wooden, a basketball player and previous UCLA basketball coach once said, “Be more concerned with your character than your reputation, character is what you really are, while your reputation is merely what others think you are.” Honor, courage and commitment are characteristics each of us should strive for.