A Hero in Disguise by Erica Persano 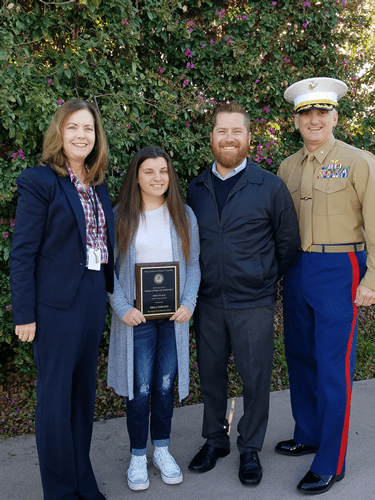 A Hero in Disguise

When you picture someone dressed in a fancy costume with a cape, the word that comes to mind is “hero.” A hero can be as ordinary as a parent, friend, or even a celebrity. What makes a hero is not a cape or super powers, but the fact that they put others before themselves. My dad, Colonel John Persano, is an outstanding Marine because he is a selfless leader, risks his life for the sake of others, and is devoted to his work and family.

My dad is an outstanding, selfless leader because he always takes charge and supports his family, friends and Marines. He never asked his Marines to do anything he wouldn’t do himself, and sets an example to follow. My father has been a Marine for 26 years. He was a pilot for 18 years, flying a CH-46 helicopter. He was deployed four times for seven months to Asia and the Middle East. He trained his Marines and helped people after natural disasters. He was deployed to Iraq in 2004 and 2005, after 9/11. He also deployed to Afghanistan in 2010 for eight months where he fought the Taliban and helped Afghans rebuild the country. He was responsible for getting girls a fair education, build schools, get medicines for hospitals, and build the police force.

Furthermore, my father is fearless and risks his life to protect others. He stands in the line of danger for the sake of others. During those three times he was deployed, he flew helicopters, picked up wounded Marines, and took them to safety. Not only did he risk his life for others, he also brought joy into other’s lives. He helped start a youth soccer league in Afghanistan in 2010, while helping Afghans rebuild their homes, schools, and hospitals. I will always look to my dad as a role model because of his leadership. He has inspired me to love learning and appreciate my education. He has pushed me to be in all honors classes. I have always worked hard with my schoolwork and hope to have an amazing future.

Moreover, my dad is fully devoted to his work and family. He is currently a Colonel in the USMC and a professor at SDSU where he teaches Homeland Security. He devotes his time to help students with their writing and finding jobs after graduation. He also travels around the country for Homeland Security, helping police and firemen respond to natural disasters. He has always supported our family; whether it’s taking me to school at 5:30am, or driving my sister’s hours away for soccer games, he is always there for us. He has shown me that it’s important to be there for the people you love – especially the ones that need you the most. I have always helped my friends and family with whatever they need, whether it’s schoolwork or something personal.

My dad, John Persano, will always be my role model and hero because of his selfless and devoted actions. I strive to become a supportive, caring, and bold person, just like my dad. I have always admired his personality. He has always had a drive to help people and has shown me that it takes hard work and sacrifice to contribute to a greater good. I know that in order to follow in his footsteps, I need to work at gaining these quality traits. He is my hero, not because he wears a cape, but because I could only hope to become the amazing parent, leader, teacher, and friend.