The Least Honored Heroes in Life by Vanessa Zhou 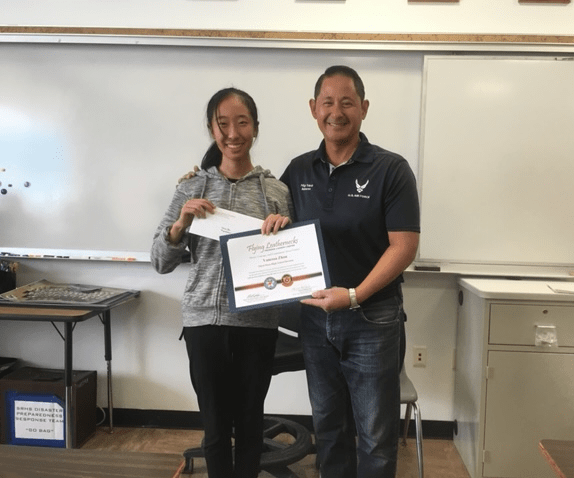 Vanessa is pictured above with her teacher, Ferdinand Toledo.

The Least Honored Heroes of Life

The definition of “hero”, by Oxford Dictionary, states, “a person who is admired for their courage, outstanding achievements, or noble qualities”. Teachers fit all of those categories. They muster courage every day to teach in front of their class, They have to be outstanding to become a teacher in the first place, teaching children how to have a positive effect on society themselves. Finally, they have many noble qualities- which teacher are never recognized and honored enough for. The teacher, my hero that I want to honor by writing about, is my third-grade teacher, Ms. Sandra Tichenor.

Mrs. Tichenor is still my favorite teacher, all the way through today. When I first met her, it was an unusual and scary time for me. I had just moved, into a little apartment complex, in New Jersey. As Labor Day and a new school year approached, my stomach twisted into nervous anticipation over a new school, new teachers, new classmates. In late August, we received news regarding class arrangements for the school year: I was placed in Ms. S. Tichenor’s class.

I was nervous for the week leading up to school, but I liked Mrs. Tichenor without even meeting her, because of a single voice message. The night before school, at 6 pm, my mother’s phone received a message, and to my surprise, my mother handed her phone to me. Ms. Tichenor’s velvety, flowing voice came through the phone, welcoming me to the school, and telling me warmly to get a good night’s sleep. That moment changed my whole dreadful perspective of the school. The fact that Mrs. Tichenor had just taken five minutes of her time to acknowledge me as a new student and welcome me was something that I liked immediately about her, leading to me forming a closer bond with her in the school year. This little detail I will forever remember, because it was an act of pure kindness, and one of the reasons why Mrs. Tichenor is my hero.

Although Ms. Tichenor was demanding, her class was always enjoyable and intellectually enhancing. I was always delighted when she taught math in front of the class, as she would give special attention to every one of us after the lesson. I suppose the reason I enjoy math class a lot comes from Ms. Tichenor’s teaching technique. Ms. Tichenor also had a gift system. Everyone received a flashcard on the first day of school, and when we performed well in class, we would get a star drawn on it. 25 of those stars would get you a little present from the gift box. Early in the year, I was often jealous and sometimes resolved to draw some stars on without Ms. Tichenor knowing. However, I was caught once, received a scolding, and never tried so again. Ms. Tichenor was firm in teaching all of her students the right thing, which is something that I still try to do today when making my own decisions.

Regarding why Ms. Tichenor is my hero, I have a couple more anecdotes. First, I was an avid reader throughout elementary school. I enjoyed all books, spending most of my time at the school or public library. Once, the class was discussing the short story Stone Fox, but I had already finished the entire book and was itching to read my new library book. When I asked Ms. Tichenor, she refused, but I threw a fit right then and there. I kept on sobbing until Mrs. Rodriguez, the class aid, led me into the hall and I settled down. Shortly thereafter, I wrote an apology to Ms. Tichenor, and she responded with a warm hug. In a way, Ms. Tichenor had become another ‘parent’ to me, and we maintained a closer bond. Finally, once, I was feeling down in 5th grade, and I stopped by Ms. Tichenor’s room to say hi. When she saw my expression, she invited me to tell her what was going on. She instantaneously changed the course of my day, and even if I had left her class two years ago, she still cared about me as a former student, showing me that compassion was the best thing one could give.

Again, I would like to honor my hero, my teacher Ms. Tichenor. Even though it’s been a long time since I have been in her classroom, I still want to give her the credit she deserves in making me who I am today. I believe the following quote defines my teacher hero perfectly:

A hero is somebody who is selfless, who is generous in spirit, who just tries to give back as much as possible and help people. ~Debi Mazar