My Hero by Luke Renda 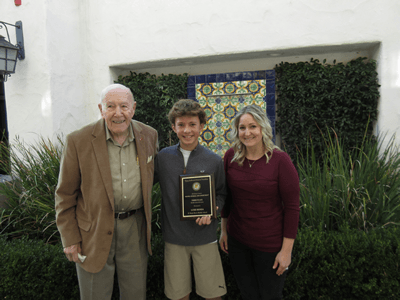 My hero’s name is Harley John Bridger but I can’t remember the last time I heard it. We call him H.J., or Harter, or Harel. Sometimes, he actually calls himself (a twinkle in his blue eyes) “Hero.” He’s my ninety-four year old, great grandfather. HJ fought in World War II, as a technical sergeant in the Army Air Force. He flew aboard the mighty plane known as the B-24 Liberator. Part of a 10-man crew, Harter was a radio operator and flew 35 dangerous missions over parts of Hungary and Germany from 1944-1945. My hero is a man who showed bravery and courage during a time of intense fear and never gave up on his crew while risking his life.

Witnessing several planes get shot down, the fear of his own crew suffering the same fate was always on his mind. Miraculously, all 10 men of his crew came home from the war and 3 are still living today. HJ was a part of the operations to bomb Blechhammer, a very heavily defended oil refinery in Germany. After dropping 17,000 tons of bombs on Blechhammer, it was successfully annihilated. During one of his stories, he recalled the German troops were heavily armed, firing artillery straight up into the sky, creating a foggy, black haze that made it impossible to figure out where to drop the bombs. Most of Harter’s friends in the other bombing crews never made it back from these heinous missions. Every mission, the crew knew somebody would get shot down; they just didn’t know whom. Harter once told me that the take-offs for each mission were the scariest part. The fear of the unknown. But like being a part of a sports team, you couldn’t quit. Everyone in the crew depended on each other. Now, whenever I’m playing a sport and I feel like I want to just leave and quit the sport, I think of being part of a bombing crew. You could never let you’re crew down, or it would cost you your life. That’s what I think in situations when I want to quit, and it helps myself get up and think that I absolutely cannot let my team down.

My hero made sacrifices to fight for his country. A young man, he left behind his family and loved ones. I have learned from him that having courage means you have to persevere and do what you have to do even when fear is consuming you. On November 25th, 2018 Harter will turn 95 years old and in true hero fashion, he will no doubt perform his usual 10 birthday push-ups. In many ways he shows the same strength of his twenty-one year old self. He still mows his own lawn every week! I know I’m lucky he is still celebrating birthdays and I’ll continue to keep making memories with him and listening to his “war stories” so one day I can share with my own kids about my hero.