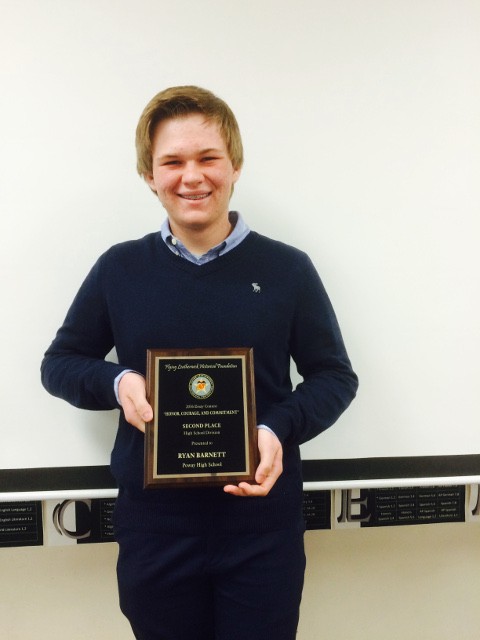 Honor; many definitions of honor exist in dictionaries, websites, databases, encyclopedias, etc. These definitions were mostly written by scholars. These translations are not inaccurate, but they have nothing to back up what they define as honor. They base their definition on what it logically stands for, not morally. When you ask a former soldier, or service member, what honor means to them, you may hear the same definition of what a scholar would say. However, the soldier, or service member, will have experiences and something to back up what honor means to them. Honor is abstract, and it’s something that really can’t be explained, it is experienced. When I was 12 years old, I attended a VWF (Veterans of Foreign Wars) celebration. I was pulled aside by one of my Boy Scout leaders and was honored to meet a man named, Nick Popaditch. Mr. Popaditch is a retired United States Marine Gunnery Sergeant. He was ambushed when a rocket propelled grenade hit him in the head and he lost the sight in one of his eyes. Popaditch never gave up; he continued to fight for his life and now continues to be an honorable leader in politics. He told me many things that day, but the most important message he gave me that day was to never give up, and keep on pressing towards Eagle Scout, the highest rank in Boy Scouts.

Courage; fearlessness, the strength, and the mental capability to fight for what is right. I was being bullied every day in middle school so I know how it feels to be treated unfairly. One day, my friend was being bullied and I went into the situation not knowing who it was. As soon as I saw that the guy was bigger than me, I almost turned around. I stood my ground and spoke up for my friend, even though the guy was intimidating. I know that may seem like a small anecdote, but it took a lot of courage to stand up for someone who was being treated wrong. During the Battle at Fort McHenry the men that were on the front lines had immense courage because they knew the dangers of war, they knew that they could have died that very moment, but did they run away or give up, even when they knew they could die at any second. They kept on fighting. They had courage to continue the fight so that we could enjoy the personal freedoms we have today. Men fought day and night, for the sake of our country. Courage was demonstrated when 415 brave first responded died in the 9/11 terrorist attack. Firefighters, policemen, and other people that volunteered to help the injured or other salvage the dead, gave their lives to help others even when they knew they could have died at any second. 343 courageous firefighters went into the Twin Towers that fateful day knowing that they could be killed and 72 brave police officers lost their lives saving the trapped, the dying, and the wounded.

Commitment; the mental and emotional capability to stop at nothing and to keep fighting through. There is a quote that says; “Commitment means staying loyal to what you said you were going to do long after the mood you said it in has left you.” Being involved in scouts and robotics for the past ten years is showing that I’m committed to my future. There is no such thing as an ex-scout. Once a scout, always a scout. Commitment is a choice and we live in a society where it seems that many people quit. They quit at school, sports, relationships, anything that it hard. There are times when life is difficult, when we feel tired or defeated. Commitment means never giving up, and seeing the task at hand to the end. I have met some pretty amazing people in my life so far. I have met brave hero’s, like Nick Popaditch, who lost an eye while protecting our country. He remained committed and determined to never give up.

I want to be a person who has honor, courage, and commitment. I have met some amazing people who embodied all of those qualities and they have been a tremendous influence on my life. It takes a great deal of determination and hard work to be someone who has all of these traits. Although my path in life may not take me in the direction of the US Marines, I want to grow up to have all of these traits and be the best person I can at whatever career I finally end up in. I know that I have a lot of work to do to reach my full potential, but I keep telling myself “semper fidelis” which means “always faithful.” If I am faithful, then honor, courage and commitment will follow.