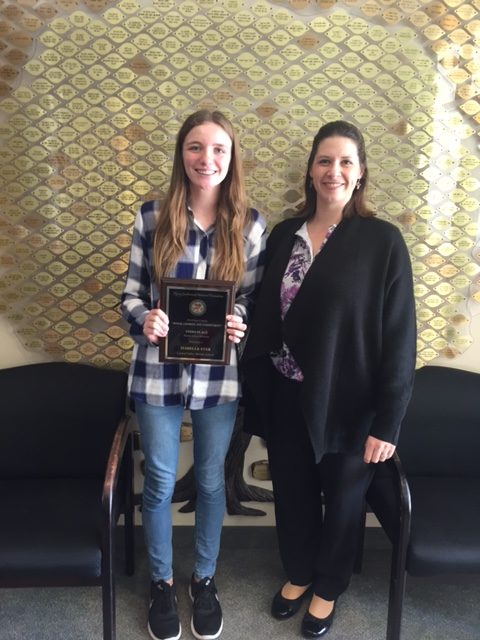 Honor, courage, commitment. It can be interpreted many different ways to all kinds of
people. For a child it may mean that she has conquered her fear of heights by finally climbing a
tree. Alternatively, for a US Marine honor, courage, and commitment are demonstrated each day
by following the highest standards when doing his or her job. To me, when hearing these words,
my brain immediately jumps to the sacrifices that military men and women put themselves
through each and every day in order to protect our country. However, if we were to look around
every now and then, we can see that role models that portray these traits can be found all around
us.

The first pair of people I would like to recognize who depict commitment would have to
be my parents. Every day, since I was young child, I can see their commitment for being my
parents shine through. This is shown many ways but the one way I saw commitment blossom
within them is when I had to get three back surgeries. During this time, they would comfort me
and never let me see the situation get to them. Instead of cowering, they told me chin up, and
encouraged me to focus on the good aspects in my life.

In addition to my compassionate parents, another person I would like to recognize who
showed courage is my late grandfather. Unfortunately, my grandfather passed in 2012 when Alzheimer’s disease got the best of him. Alzheimer’ disease is quite horrific: it takes someone and strips them of their dignity as their brain slowly shuts down. Nevertheless, every time we would go visit him, he was as courageous as possible even when he couldn’t remember much and throughout his battle with the disease. By living this way for the duration he had this
atrocious disease, to show me me that he was well during our visits, a smile would slowly appear on his face-even if he had forgotten my name.

Lastly, the person I would like to recognize for honor would have to be my first
volleyball coach. Our team, which wasn’t the best in the world, would occasionally lose a match
or two (ahem, maybe more). When this occurred, instead of crumbling, Coach would tell us to
pick ourselves up and “Get the next one!” In response to these words, our team would play to the
best of our ability to win the next game. Throughout the season, she held her honor with a tight
fist, even after the ugly losses our team faced. This led to our team traveling to a competitive
tournament in Phoenix, Arizona, and performing our best of the long season.

All in all, when asked what honor, courage, and commitment mean to me I immediately
think of women and men in military service, along with my parents, grandfather, and coach.
While these traits can be applied to many different people in small aspects of their lives, it is
astounding to know that military men and women show these three traits every minute of every
day during their service to our country.

To them: thank you. From land to sea, these men and women fiercely protect our nation
from the unknown that is pressed upon them. Since these powerful people have sacrificed their
own lives, people, like you and I, are able to sleep well at night knowing we are protected by
these exceptional people.

Winners of the 2020 “Marines in Flight” Art Contest have been announced. See a gallery of the winning entries.

2019  Art Contest Winners Theme: "Marines in Flight" Annual art contest gives students a platform to express their artistic and creative skills as they learn about U.S. and aviation history and the contributions, courage and sacrifices of the men and women who designed, built, flew and maintained...
Read Other Winning Essays

My Hero by Jocelyne Najar Velazquez

The Least Honored Heroes in Life by Vanessa Zhou

My Hero by Luke Renda