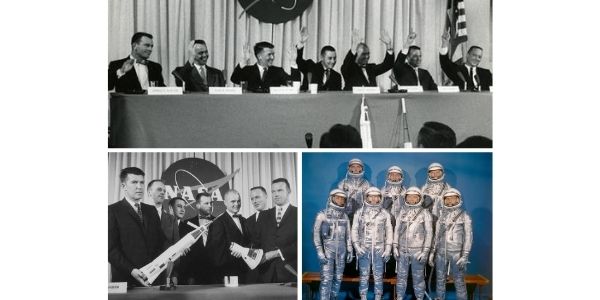 Today’s question is this, “When did the first Marine aviator become an astronaut?”

When asked who wanted to be the first man in space, all seven raised a hand, except John Glenn, who raised both hands! (Typical Marine!) The second Marine who was a part of the original Mercury Seven was Astronaut “Gordo” Cooper.

The Mercury Seven created a new profession in the United States and established an image of the American astronaut and NASA’s Manned Space Program for several decades to come. These seven American explorers, all military test pilots, inspired generations of young people to pursue careers in aerospace, science, engineering and health sciences.

Approximately 30% of all US manned space flights (Project Mercury through the International Space Station) have included Marines as part of the crew.

For more information about the Mercury Seven and Marines in Space listen to the podcast below.