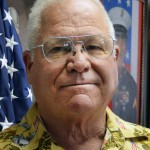 Sergeant Major Mike Zacker (USMC retired) joins our podcast by telephone.  He is a highly decorated and accomplished Marine whose service spanned two wars.  Sergeant Major Zacker served four tours in Vietnam and participated in 451 helicopter combat missions. We asked him to describe his role and what he saw during “Operation Frequent Wind.”

Ambassador Graham Martin evacuated the American Embassy at 4:58 am on April 30th. He was airlifted out on Lady Ace 09, a United States Marine Corps CH-46 Sea Knight of squadron HMM-165. It is one of the most historically significant aircraft in the Flying Leatherneck Aviation Museum’s collection. To learn more about Lady Ace 09 and to see an interview with Captain Gerald Berry who flew Lady Ace 09 during Operation Frequent Wind, please click here.