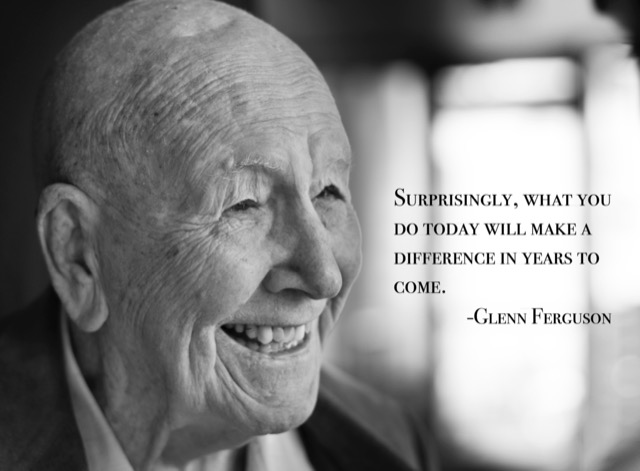 Inspired by Major Ferguson and by Mitch Albom’s 2007 best seller, Tuesdays with Morrie, Foundation volunteer and producer of the “On the Fly” podcast, Patrick Ball, started meeting every Sunday with Major Ferguson to document his experiences and wisdom. With 100 years of experience and acquired wisdom, Major Ferguson has that uncanny ability to synthesize life lessons into rare practical ideas that strengthen individuals, families and communities..

Maj Glenn Ferguson (USMC retired) made and observed history  as a fighter pilot in the Pacific during WWII, a medical evacuation helicopter pilot in the Korean Conflict and as co-pilot of Marine One for President Eisenhower.

Happy birthday Maj Ferguson and thank you for being a very active volunteer, a huge supporter of the work of the Foundation to preserve USMC aviation history, and the founder of the annual student essay contest and the Irene Ferguson Marine Wife Recognition Award.

Thank you, Patrick Ball, for giving us permission to publish the “On the Fly” podcasts with Major Ferguson.