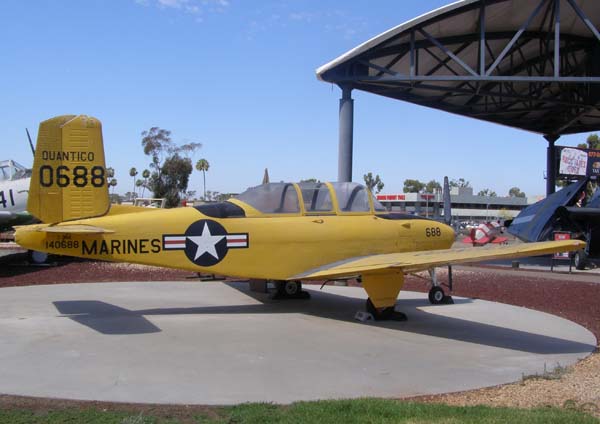 The T-34 was the brainchild of Walter Beech, who developed it as the Beechcraft Model 45 private venture at a time when there was no defense budget for a new trainer model. Beech hoped to sell it as an economical alternative to the North American T-6/SNJ Texan, then in use by all services of the U.S. military.

Its design was derived from a small civilian airplane, the Beechcraft Model 35 Bonanza however, the military version incorporated structural design and aerodynamic features that made it more suitable for the stress required for military training such as loops, dives, and stalls.
The Mentor was selected as its new trainer over the Temco Plebe. The Navy, however, could not just adopt the Air Force’s version without a number of changes. Besides the fact that the Navy did some things differently than the Air Force, the Department of Defense had rules that mandated aa sharing of Research and Development costs between services that use the same aircraft. The Navy wanted the mentor, but not the R&D costs. One solution was to make enough changes to the aircraft so that it would be “classified” as a new model.

These changes included a castering (non-steerable) nosewheel, adjustable rudder pedals, seats that only adjusted in the vertical, an additional one degree of wing dihedral, and a spring system to increase elevator forces. Externally the T-34B differed from the A model in having the small fillet at the base of the rudder deleted and a bulged battery compartment door to accommodate a different battery system.
Production of 423 T-34Bs began in 1954 and was completed in 1958. The Navy which used the aircraft for basic pilot flight training at Naval Air Station Saufley Field, Florida. They were also assigned to several headquarters squadrons across the country, where Marine and Navay pilots used them to stay proficient while in non-flying billets. After 16 years of service the T-34B was replaced with the T-34C which is powered by the more powerful and cost-efficient Pratt & Whitney PT6A-25 turboprop engine. After their retirement, T-34Bs were sent to the Naval Recruiting Command or to various Navy and Marine Corps flight clubs.

Beginning in 1975, the turbine-powered T-34C Turbo Mentor was introduced as the Navy’s new primary flight trainer for Student Naval Aviators, and began replacing the North American T-28 Trojan with training air wings at NAS Whiting Field, Florida and NAS Corpus Christi, Texas. In the mid-1980s, it also commenced service as a basic trainer for Student Naval Flight Officers at NAS Pensacola, Florida
The T-34C is no longer used as a primary training aircraft for Student Naval and Marine Aviators under U.S. Navy. It has been replaced by the T-6 Texan II.

The aircraft on display was the 22nd T-34B built. On August 10, 1955 it was accepted by the Navy and served with VT-1 at Saufley Field near NAS Pensacola. In 1964 it was transferred to NAS Glynco, GA, and spent two years there as a station aircraft. It returned to Saufley Field and VT-1 and trained aspiring Naval Aviators for twelve more years. In April 1976 it was sent to the Flying Club at NAS Corpus Christi. In 1980 it was moved to the Camp Pendleton Flying Club and then ended its flying career with North Island Flying Club. This aircraft is on loan from the National Naval Aviation Museum 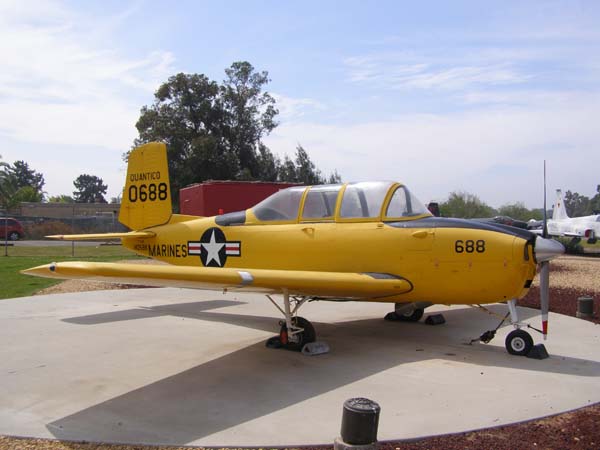 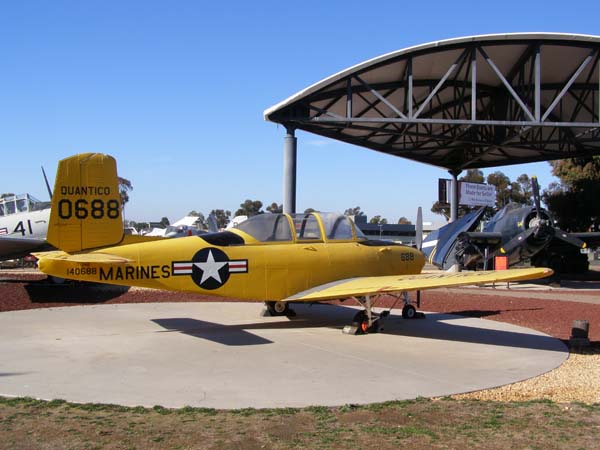