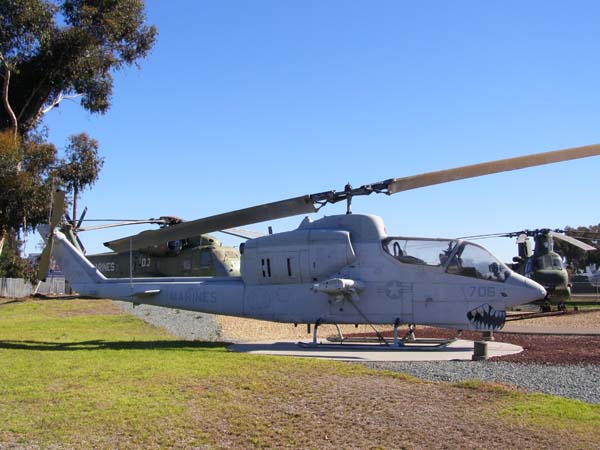 With the success of the air assault concept in Vietnam, there became a need for a helicopter gunship to provide armed escort and fire support for lightly armed transport helicopters.

The AH-1 Cobra was developed using the rotor, transmission, and engine from the UH-1 “Huey”. The Cobra features tandem seating to give both pilot and gunner nearly unlimited visibility. Both crew stations have flight control and fire control systems permitting flexibility in division of functions under normal and emergency situations.

The AH-1J SeaCobra was developed for the USMC as a twin engine variant of the single engine Cobra with the desire for improved safety and redundancy for over-water operation. The Pratt & Whitney Twinpac T400 engine (two 900-hp turboshaft engines coupled together) gave an overall increase in performance and reliability. The J model also included a more powerful gun with the three barrel XM197 20mm cannon as well as other improvements.

This is one of eight aircraft used by HMA-369 in Operation MARHUK (Marine Hunter Killer).

When Marine and Navy carrier aircraft mined and closed Haiphong Harbor (the North’s main port) in May 1972, the North Vietnamese resorted to having Chinese and Soviet cargo ships anchor offshore at various locations and cargo would be offloaded into smaller sampans for transfer to shore. It was decided that the AH-1J would be ideal for the role of maritime interdiction off the coast of North Vietnam. In June 1972, HMA-369 boarded the amphibious transport ship USS Denver (LPD-9) and headed for waters off North Vietnam. The SeaCobras operated in pairs and would sink the sampans with their Zuni rockets and 20mm cannon. The pilots were also trained to call in naval gunfire and air strikes while the gunners in front seats of the AH-1Js focused on the sampans. After several weeks, the shore-based heavy AAA guns learned not to fire on the SeaCobras thanks to the naval gunfire support and air strikes the pilots would call in. When Operation MARHUK ended on 26 January, 1973 with the end of Operation Linebacker II, nearly 1,000 sorties had been flown with 123 sampans sunk, further straining the logistics of North Vietnam that eventually drove them to the bargaining table.

Bell AH-1J (BuNo. 157784) was the 28th SeaCobra built. It was accepted by the Marine Corps on October 31, 1970 and assigned to HMA-369 at MCAS Futenma, Okinawa. In May 1972 ‘784 was attached to USS Denver (LPD 9) and USS Dubuque (LPD 8) for Operation MARHUK. In July 1973 it was assigned to augment HMM-164 aboard USS New Orleans (LPH 11) and participated in Operation End Sweep – the removal of mines in North Vietnamese waters. In November it was attached to HMH-462 at MCAS Futenma to support their heavy lift operations. In June, 1974 ‘784 returned to USS Dubuque for further operations off the coast of North Vietnam. After a maintenance period at NAS Atsugi, it was attached to HMM-165 (along with our CH-46) operating out of MCAS Futenma. In January 1977, it was transferred to MCB Camp Pendleton and the “Vipers” of HMA-169, replacing their aging AH-1G’s originally borrowed from the US Army in 1969. In August 1978, ‘784 was attached to HMM-165 (and reunited with our CH-46 again) aboard USS Okinawa (LPH 3). In April 1979 it returned to HMA-369, then after a brief stop at H&MS 39 to repair damage, it was transferred to HMT-303 Atlas, a west coast fleet training squadron (where it served with our UH-1N). It lastly served with the “Coyotes” of HMLA-775 and in 1993, after reaching 4,398 airframe hours ’784 was stricken from active inventory and was assigned to the Flying Leatherneck Aviation Museum. This aircraft is on loan from the National Museum of the Marine Corps. 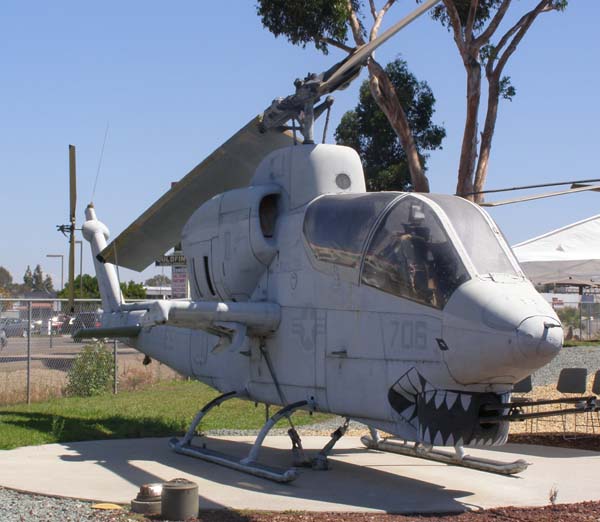