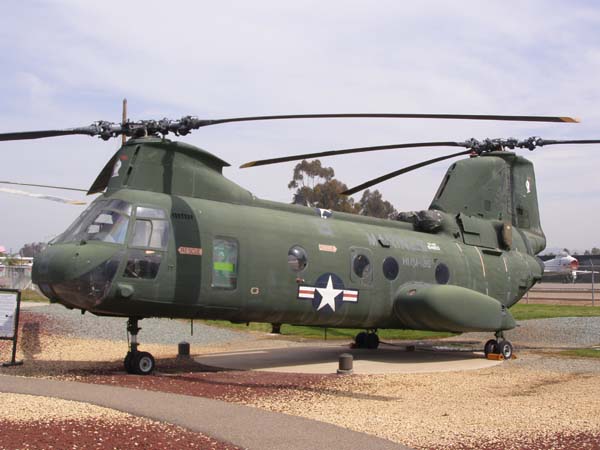 Known affectionately by the troops as the “Phrog,” the CH-46 was designed in the early 1960s as a replacement for the Sikorsky UH-34D Seahorse.

First flown in August 1964, the Sea Knight was a mainstay of Marine aviation combat support for 51 years. The CH-46 made its last flight on August 1, 2015 and was replaced by the MV-22 Osprey. CH-46 was a twin-engine, tandem three-bladed folding rotor design powered by General Electric T-58 turboshaft engines. The engines were mounted in the tail and utilized a drive shaft to power the forward rotor. The engines were coupled in order to ensure that either could power the helicopter in an engine-out scenario. On the ground the CH-46 sat nose-high making the rear cargo ramp more accessible.

During the Vietnam War, the CH-46 was one of the prime US troop transport helicopters in theatre, slotting in between the smaller Bell UH-1 Iroquois and larger Sikorsky CH-53 Sea Stallion. During the 1972 Easter Offensive, Sea Knights saw heavy use transporting US and South Vietnamese ground forces to and around the front lines.

U.S. Marine CH-46s were used to deploy the 8th Marine Regiment into Grenada during Operation Urgent Fury, evacuated the surviving crew-member of a downed AH-1 Cobra, and then carried infantry from the 75th Ranger Regiment to secure and evacuate U.S. students at the Grand Anse campus of St. George’s University, though one crashed after colliding with a palm tree.

CH-46E Sea Knights were also used by the Marine Corps during the 2003 invasion of Iraq. In one incident on 1 April 2003, Marine CH-46Es and CH-53Es carried U.S. Army Rangers and Special Operations troops on an extraction mission for captured Army Private Jessica Lynch from an Iraqi hospital. During the subsequent occupation of Iraq and counter-insurgency operations, the CH-46E was heavily used in the CASEVAC role.

The CH-46D on display (BuNo 154803) was accepted by the USMC on February 19, 1968 and assigned to HMM-263 at MCAF Santa Ana, CA. The “Thunder Chickens” joined MAG-36 at Phu Bai Combat Base in January 1969 and remained there until April 1971 when it was transferred to the “White Knights” of HMM-165. Operating off USS Tripoli (LPH 10), they operated as part of the Special Landing Force in support of activities in the Republic of Vietnam. It then transferred to HMM-164 “Flying Death” flying combat support and search and rescue operations off the coast of Vietnam. In April 1972 HMM-164 deployed aboard the USS Okinawa (LPH 3) where it continued to provide Joint Service combat support in Operation Song Than and Operation Lam Son 719 until returning to MCAS Futenma in 1973. In July ‘819 transferred back to HMM-165 aboard USS Okinawa. At the end of April 1975, the helicopters of HMM-165 played a key role in the evacuation of Saigon, Operation Frequent Wind. At 0500 on 30 April 1975, under direct orders from President Gerald Ford, the crew of Lady Ace 09 (our aircraft) evacuated U.S. Ambassador Graham Martin from the US Embassy, Saigon, prior to the Fall of Saigon. In November 1977, the White Knights moved to Marine Corps Air Station Kaneohe Bay, Hawaii where they were reassigned to MAG 24. In December 1979 at a time of high international tension arising from the Iran hostage crisis and the Soviet invasion of Afghanistan, HMM-165 deployed to the Arabian Sea with the 31st Marine Amphibious Unit (31st MAU) aboard the USS Okinawa. In 1981, HMM-165 was again deployed to the Western Pacific and Arabian Sea with the 31st MAU on board the USS Belleau Wood (LHA 3). While deployed HMM-165 performed humanitarian work assisting the government of Sri Lanka. Following this deployment, ‘803 briefly joined the U.S. Navy, flying with HC-3 “Pack Rats” out of NAS North Island. In May 1982 ‘803 went into Naval Air Rework Facility, Cherry Point to be upgraded to the CH-46F model. Upgrade complete, it joined the Marine Corps Reserve’s HMM-764 at MCAS El Toro. When the base was closed in 1999, HMM-764 relocated to Joint Reserve Base, Edwards AFB, CA. In 2001 it was transferred to HMM-774 at NAS Norfolk. In July 2004, the squadron was mobilized and deployed to Al Asad, Iraq in support of Operation Iraqi Freedom until it was demobilized in July 2006 and this aircraft was retired from service. 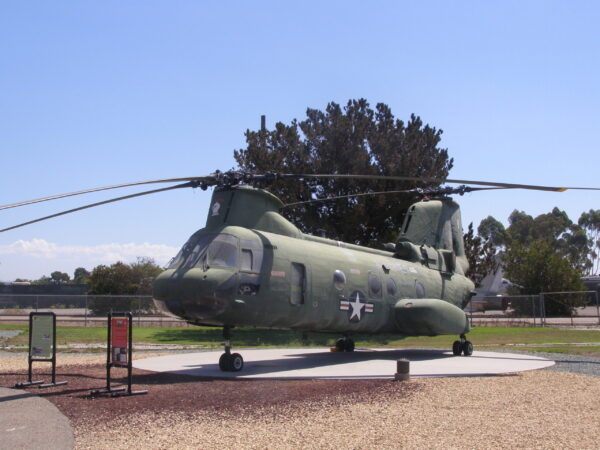