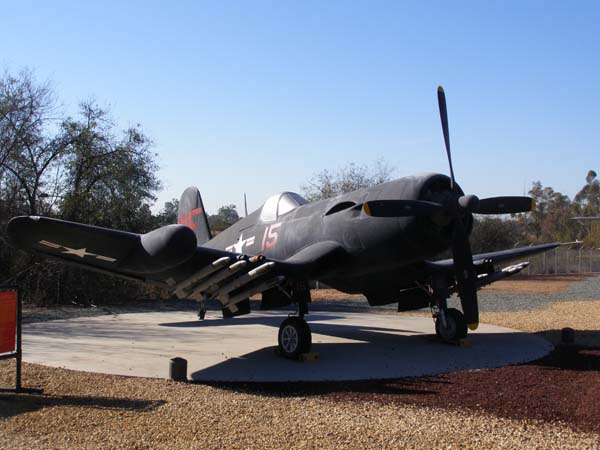 Inside Loop Podcast Q & A
“Why the inverted gull wing on the Corsair?”

The Corsair was the Marine Corps’ workhorse fighter and arguably the best fighter in World War II. It was originally designed for carrier operations by Chance Vought which gave it a massive engine and propeller, making it faster and more powerful than its contemporaries. The inverted gull wing provided the propeller enough ground clearance and allowed the Corsair to have shorter landing gear, which were better for carrier landings. However, this did not come without a cost; the longer engine reduced forward visibility, early design flaws caused stalls during landing approaches; and the wheels tended to bounce during landings. As a result, early carrier tests were plagued with accidents (the source of its “Ensign Eliminator” nickname), and the Navy picked the more forgiving F4F Wildcat and F6F Hellcat as their primary carrier fighters instead.

The Navy gave its Corsairs to the Marine Corps, which eagerly accepted it. It was far superior to their other fighters, like the F4F Wildcat. The Marines operated them from improvised bases on Pacific islands with deadly results. Because the Corsair was faster and better armed than the nimbler Zero, it took air superiority back from the Japanese and helped turn the tide of the war. It also wreaked havoc on Japanese supply ships and ground forces. An important part of the Corsair’s success was the skill of its pilots. Every pilot in Gregory “Pappy” Boyington’s legendary “Black Sheep” squadron flew a Corsair. Some of the Marines’ most famous aces flew Corsairs, including Pappy Boyington, John Bolt, Robert Hanson, Edward Shaw, and Ken Walsh, the first Corsair ace.

The Corsair was so successful that 12,571 were manufactured. During the Korean War, the Corsair was one of the few World War II aircraft the Navy kept because it could carry more weapons than their jets. The Corsair could also loiter over an area longer when providing low-level close air support. As such, it was primarily used as a fighter-bomber, and it proved as capable as ever in this role.

The F4U-5N on display is a night-fighter variant of the F4U-5. As a night-fighter, the F4U-5N had an AN/APS-19 radar on the leading (front) edge of the right wing for tracking targets in the dark. The F4U-5 kept some of the F4U-4’s features, including a four-bladed propeller (earlier variants had only 3) and similar armament. It also included some modifications based on recommendations from pilots and mechanics. Spring tabs were added to the elevator and rudder to make them easier to control at high speeds. Automatic blower controls, cowl flaps, intercooler doors, and an oil cooler increased air flow to the engine and kept it from overheating. It also had a modernized and more comfortable cockpit. After the Korean War the F4U-5N was replaced by the F2H-3 Banshee.

F4U-5N (BuNo 122189) was delivered to the U.S. Navy on November 8, 1948 and was assigned to Composite Squadron FOUR (VC-4) at NAS Atlantic City. After undergoing 8 months of upgrades at NAS Jacksonville and NAS San Diego, it was transferred to VC-3 at NAS Moffett Field, CA on May 1st, 1952. One month later it was one of four aircraft assigned to VC-3 Unit 1 and attached to Air Task Group Two (ATG-2) aboard USS Essex (CV-9) for its second combat cruise in Korea. Once on station its primary mission was “Night Heckling”, striking convoys, trains and other targets of opportunity In November 1954 it returned to VC-4 and deployed aboard USS Antietam (CV-36) in April 1955. On November 30, 1955 122189 was retired and stored at NAS Quonset Point, RI. It was stricken on April 27, 1956 having accumulated 1,392 total flight hours in 55 months. It was acquired by the USMC museum system in 1975 and is displayed with the 1952 markings of the “Flying Nightmares” of VMF(N)-513. 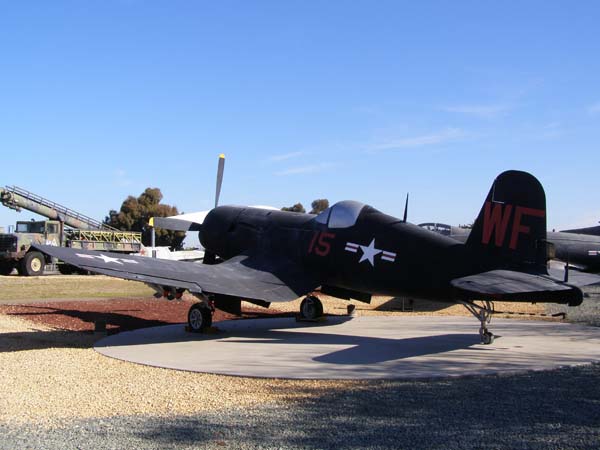