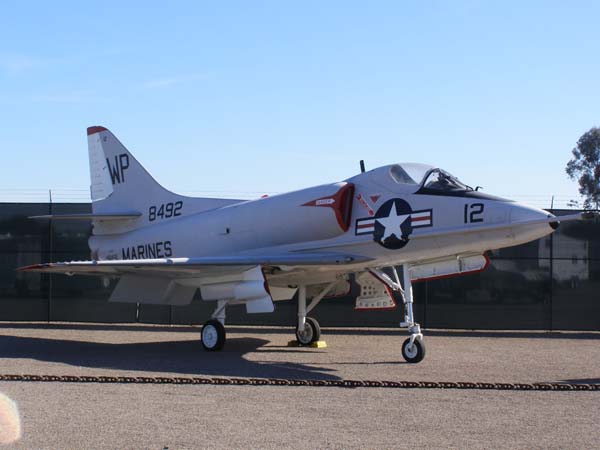 The Douglas A-4C Skyhawk (also known as the A4D-2N) was a lightweight, high-performance, carrier-based attack aircraft that was simultaneously versatile in-flight performance and attack capability. It would go on to be produced in many different variants, continuously upgraded and retrofitted with newer technologies and better engines for increased performance.

With production spanning around 25 years, the Skyhawk represents one of the military’s most successful aerial attack platforms ever produced.

The Skyhawk was a workhorse for the Navy and Marines during the Vietnam War. The original concept was for a light attack fighter that could be operated in large numbers from aircraft carriers. Because the Navy also wanted to strengthen its usefulness in America’s Cold War nuclear deterrence strategy, the aircraft also had to be able to carry a nuclear weapon. Douglas Aircraft Company proposed a design that was both lighter and cheaper than what the Navy requested.

The A-4 sported a low-mounted delta wing with a quarter chord sweep of 33 degrees, with no need for folding wings due to the aircraft’s overall small size. Leading edge slats were incorporated into the wings to improve handling at low speeds and high Angle of Attack. The engine was mounted in the rear to simplify the maintenance and replacement process, which in turn reduced the complexity of the aircraft’s design. One of the primary new concepts fielded by the A-4 and its brethren was the notion of buddy air-to-air refueling, where one A-4 would act as a tanker for the main attacking unit.

The A-4C went into production in 1959, with improvements in cockpit layout, safety features, radar equipment, and all-weather flying capability from previous variants. Six hundred and thirty-eight A-4Cs were built, making it the most numerous A-4 model produced. While earlier versions were designed to operate only during the day, the A-4C’s systems and computers made it easier to fly and fire its weapons accurately during poor weather and at night.

The A-4C differed from the earlier A4D-2 (A-4B) with its AN/APG-53A terrain-clearance radar which resulted in extending the aircraft’s nose by about 9 inches. The A-4C also featured an improved version of the Low-Altitude Bombing System (LABS), a feature that was incorporated into the FJ-4B Fury, the aircraft that the Skyhawk directly replaced in service. Further modifications specific to the A-4C included an improved low-level ejection seat, a revised cockpit layout, and a windshield wiper. The A4D-2N was re-designated as the A-4C during 1962 in the middle of its production run. A-4Cs were eventually superseded by later Skyhawk models in US service.

A-4C Bureau Number 148492 was accepted by the U.S. Navy on April 12, 1961, and assigned to Navy Attack Squadron 192 (VA-192) “Golden Dragons” just prior to its deployment aboard USS Bon Homme Richard (CVA-31). In January 1963 it deployed again for the Western Pacific with VA-55 “Warhorses” on the USS Ticonderoga (CV-14). During the deployment, USS Ticonderoga was rerouted to the South China Sea following several defeats of neutralist forces by the Communists in Laos. After a ceasefire agreement was arranged, the ship resumed normal Seventh Fleet operations. It returned to NAS Lemoore for service with VA-125 in the fleet training of A-4C pilots. In May 1968 ‘492 was loaned to VA-873 at NAS Alameda after it was called up to active status following the capture of the USS Pueblo by a North Korean patrol boat. A few months later it returned to VA-125 when VA-873 returned to reserve status. In October 1968 it entered a depot maintenance period at NAS Jacksonville. Once repairs were completed, it was sent to VA-44, the East Coast fleet training squadron at NAS Cecil Field FL. In November 1970 it was flown across town to NAS Jacksonville for service with the Marine Air Reserve Training Detachment (MARTD). In 1971, it was transferred to MARTD MCAS El Toro, where it retired on October 7, 1974 with 1,438 airframe hours. It has been restored with the markings of VMA-214, circa 1965.