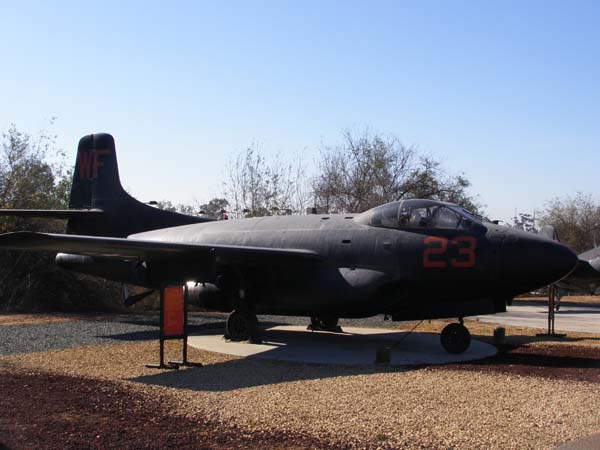 With a profile that would never be considered glamorous, the Douglas Skyknight was a conventional design delivering truly mediocre performance. Still, the Navy needed a sedan, not a sports car, and designer Ed Heinemann, who won fame for the World War II Douglas Dauntless, the A-4 Skyhawk and the 1953 Collier Trophy for the F4D Skyray, gave them what they wanted.

Surprisingly, Skyknights would soldier on for two decades of service, easily outlasting speedier, more nimble contemporaries.
As the U.S. Navy and Marine Corps’ first all-weather jet fighter, the Skyknight, traces its origins to 1945, when the Navy began studies for a jet-powered, carrier-based night fighter. Ready for service when war broke out in Korea in 1950, the Skyknight, also known as Willy the Whale, proved its worth in the capable hands of pilots and radar operators with Marine Night Fighter Squadron VMF(N)-513. The F3D scored the highest number of aerial victories for an all-weather jet fighter in that conflict. Later, in the late 1950s and 1960s, Douglas Aircraft, in conjunction with the Navy and Marine Corps, modified a number of the Skyknights to perform a variety of tasks.

The Skyknight was built around three separate radars: the search and tracking radars located in the nose plus a tail warning radar in the aft fuselage. The size of these early vacuum tube radars dictated the Skyknight’s wide, deep fuselage, side-by-side crew seating arrangement, and the location of the engines in pods located on the outside of the lower fuselage. The search radar was surprisingly effective for the early 1950s, able to pick up bomber-sized targets at 20 miles and fighter-sized targets at 15. The tracking radar could lock on at 4,000 yards and guide the Skyknight all the way in to firing position. The tail warning radar could detect attacking aircraft as far as 4 miles away, giving the Skyknight crew ample time to react.

To reduce complexity and to limit the weight of an already underpowered airplane, Heinemann’s team left out ejection seats and substituted an unusual escape slide system. It was a simple chute that began behind the seats and slanted down to a belly exit between the engines, allowing for a high-speed bailout.

VMF(N)-542 deployed to Korea with its F3D-2s in the spring of 1952. They were soon transferred to VMF(N)-513 based at Kunsan (K-8). Their primary mission was to fly night escort missions for Air Force B-29 bombers. On November 2, 1952, pilot Maj William Stratton and radar operator Hans Hoagland shot down a North Korean Yak-15, the first jet-vs-jet night kill. In subsequent night actions, F3D-2s accounted for another Yak-15 and six MiG-15s, with no losses to themselves, which gave the Skyknight an overall 8-0 superiority in Korea. In addition, no Air Force B-29 was ever lost on a F3D-2-escorted mission. VMF(N)-513 crews also flew some night strike and interdiction sorties. Two Skyknights were lost in combat to unknown causes.

124630 was the 36th F3D-2 to be built at Douglas Aircraft Corporation’s El Segundo plant. It was accepted by the Navy on March 21, 1952 and delivered to the Marine Corps at MCAS El Toro, CA. It spent two years with Marine Night Fighter Squadron 542 (VMF(N)-542) where the Tigers used the Skyknight to train pilots and Radar Operators for duty with VMF(N)-513 in Korea. On April 7, 1954 ‘630 entered a seven-month overhaul period at NAS North Island before being shipped to Fleet All Weather Training Unit Pacific at NAS Barbers Point, Territory of Hawaii. FALLWEATRAPAC trained U.S. Navy aircrew’s night fighter tactics. In April 1955 it transferred with the unit to NAS North Island, San Diego. On May 2, 1958 Fleet All Weather Training Unit Pacific was re-designated Fighter Squadron (All Weather) THREE (VF(AW)-3), the only U.S. Navy fighter unit assigned to the North American Air Defense Command (NORAD) to defend the southwest Pacific coast against enemy aircraft. On October 28, 1959 VF(AW)-3 completed its transition to the F4D Skyray and ‘630 was placed in storage at Litchfield Park, AZ. It was brought out of storage and on December 10, 1960 it began service with the Naval Combat Information Center Officer School at NAS Glynco, GA as a training aircraft. In November 1963 it was sent to the Research, Development, Test & Evaluation unit at NAF China Lake, CA where an A-4E nose was bolted on to develop the AGM-45 Shrike missile system. On February 28,1968 124630 was stricken from the inventory. It was then loaned to Raytheon and the U.S. Army as one of three Skyknights to support Patriot missile testing at White Sands, NM. In June 1987 the remaining two Skynights departed New Mexico, one heading west to MCAS El Toro (this aircraft), and the other east to NAS Pensacola and the National Museum of Naval Aviation. 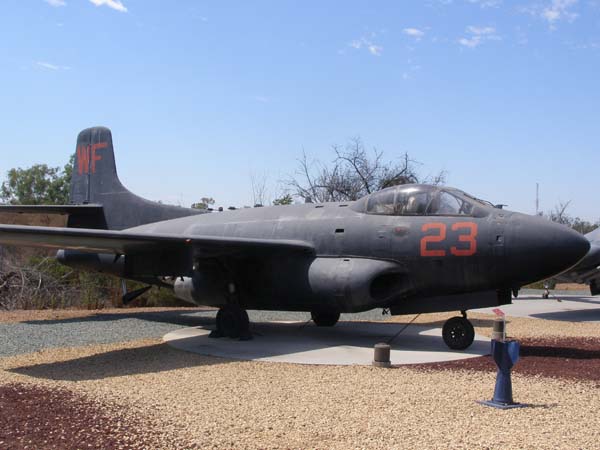