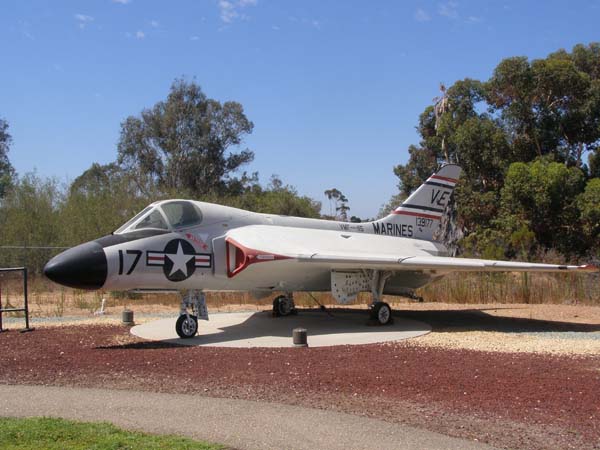 The Douglas F4D Skyray (later redesignated F-6 Skyray) is an American carrier-based fighter/interceptor built by the Douglas Aircraft Company. Although it was in service for a relatively short time (1956-1964) and never entered combat, it was the first carrier-launched aircraft to hold the world’s absolute speed record, at 752.943 mph, and was the first United States Navy and United States Marine Corps fighter that could exceed Mach 1 in level flight.

It was the last fighter produced by the Douglas Aircraft Company before it merged with McDonnell Aircraft and became McDonnell Douglas.
The Ed Heineman designed Skyray was a wide delta wing design with long, sharply swept, rounded wings based on the designs and research of the German aerodynamicist Alexander Lippisch. The design was named for its resemblance to the manta ray. The thick wing roots contained the air intakes feeding a single turbojet engine. Fuel was contained both in the wings and the deep fuselage. Leading edge slats were fitted for increased lift during takeoff and landing, while the trailing edges were mostly elevon control surfaces. Additional pitch trimmers were fitted inboard near the jet exhaust, and were locked upwards on takeoff and landing.

Production aircraft were not delivered until early 1956, while the United States Marine Corps received their first in 1957. In total, 419 F4D-1 (later designated F-6 in the unified designation system) aircraft were produced. The Skyray was designed exclusively for the high-altitude interception role, with a spectacular rate and angle of climb. It set a new time-to-altitude record, flying from a standing start to 49,221 feet (15,003 m) in 2 minutes and 36 seconds, all while flying at a 70° pitch angle. As a dedicated interceptor, the F4D was unsuited to the multi-mission capabilities soon in demand, so it had a short career in Navy and Marine Corps service, the last aircraft being withdrawn from service in 1964.

F4D-1 (BuNo 139177) was accepted at Douglas Aircraft’s El Segundo Plant on October 7, 1958. It was flown to NAS Alameda where it was placed on a ship to supplement Marine Fighter Squadron (All Weather) – ONE ONE FIVE (VMF(AW)-115) which was supporting the Formosa Straits Crisis. VMF(AW)-115 along with other MAG-11 units flew missions out of Pingtun North airfield in Taiwan. Once the crisis died down, MAG-11 returned to NAS Atsugi and ‘177 was transferred to the Navy’s VF-141 aboard the USS Ranger (CV-61) during its first WESTPAC cruise. Prior to USS Ranger’s return to Alameda, ‘117 was flown off to NAS Atsugi where it then joined VF-213 aboard USS Lexington (CV-16) for its WESTPAC cruise. It returned with USS Lexington to NAS North Island in December 1959. On February 18, 1960 it was transferred back to the Marine Corps and VMF(AW)-314 where it returned to NAS Atsugi. In September 1960 it was sent to VMF(AW)-513 at MCAS El Toro where it made several deployments to NAS Atsugi with ‘513 and VMF(AW)-542. On June 25, 1963 ‘177 was placed in storage at NAF Litchfield Park, Arizona. It was pulled out of storage on April 2, 1965 and returned to service with Naval Air Test Center’s Research, Test, Development and Evaluation lab at NAS Patuxent River, Maryland. On May 1, 1966 it moved over to the Naval Test Pilot School where it remained until it was struck off charge on November 25, 1969 with 1,744 total airframe hours. It was displayed at the USMC Air/Ground Museum at Quantico, VA in February 1970 before moving to the Flying Leatherneck Aviation Museum. This aircraft is on loan from the National Museum of the Marine Corps. 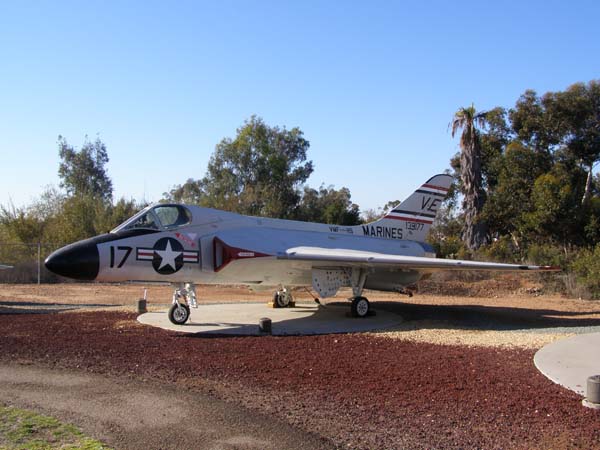