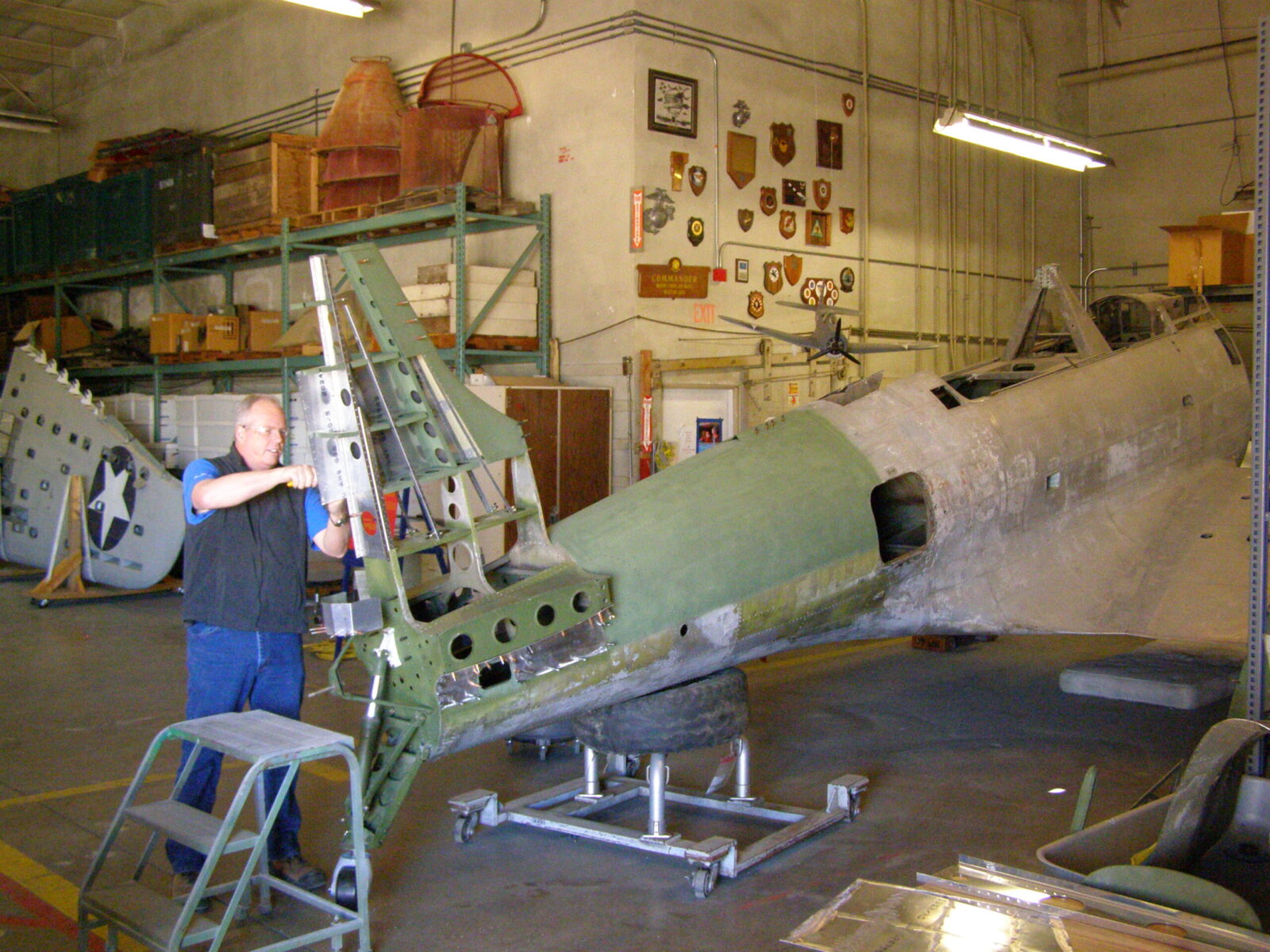 The SBD-1 Dauntless was the United States Navy’s primary carrier-borne dive bomber and scout plane at the beginning of World War II. The Dauntless, along with fighters like the F4F Wildcat and torpedo planes like the TBD Devastator, helped prove the superiority of the aircraft carrier in the Pacific Theater.

Dive bombers and torpedo planes approached enemy ships while escorted by the F4F Wildcat. The Wildcats would keep enemy fighters busy, ideally leaving ships open to torpedo and dive bomber attack. SBDs were also operated from both carriers and land bases by the Marine Corps. Their SBDs played a major role in the Battle of Guadalcanal by providing needed ground support and attacking Japanese supply ships.

Design work on the Northrop BT-1 began in 1935. In 1937, the Northrop Aviation was taken over by Douglas, and the active Northrop projects continued under Douglas Aircraft Corporation. The Northrop BT-2 was developed from the BT-1 by modifications ordered in November 1937 and provided the basis of the SBD, which first entered service in mid- 1939. Ed Heinemann led a team of designers who considered a development with a 1,000 hp (750 kW) Wright Cyclone engine. The plane was developed at the Douglas El Segundo, CA plant, and that facility, along with the company’s Oklahoma City plant, built almost all the SBDs produced. One year earlier, both the U.S. Navy and Marine Corps had placed orders for the new dive bomber, designated the SBD-1 and SBD-2. The SBD-1 went to the Marine Corps in late 1940, and the SBD-2 to the Navy in early 1941, replacing the SBU Corsair and Curtiss SBC Helldiver squadrons on US carriers. Distinctive perforated split flaps or “dive-brakes” had been incorporated into the BT-1 to eliminate tail buffeting
during diving maneuvers. The SBD-1 had less fuel capacity than the Navy’s SBD-2 and was outfitted with different armament. The greater fuel capacity and range of the SBD-2 made it better-suited for carrier operations. The Navy gave the Marine Corps the SBD-1 thinking they would operate them from bases close to the front lines, so it wouldn’t need to have as much range. Douglas’ next variant, the SBD-3, had improvements like self-sealing fuel tanks and armor. This made it better protected against enemy fire. Immediately the Navy began replacing SBD-2s with the SBD-3, giving its SBD-2s to the Marines.

In the end, the SBD Dauntless proved to be one of the most important planes in the Pacific Theater. They sunk more enemy shipping than any other Allied bomber. Their ruggedness, range, and reliability ensured that they were in production until 1944. Although the Navy would replace them with the more powerful SB2C Helldiver in that year, the Marines continued to fly them until the end of the war. The SBD on display is only remaining example of 57 SBD-1s built.

A total of 5,936 SBDs were produced during the War. The last SBD rolled off the assembly lines at the Douglas Aircraft plant in El Segundo, California, on 21 July 1944.

The aircraft on display, SBD-1 (Bureau Number 1612) was accepted by the Marine Corps on September 16, 1940 and delivered to VMSB 132 at MCAS Quantico. In March of 1942 it was sent west to stand-up VMSB-142 at Camp Kearney, here at what is now MCAS Miramar. When VMSB-142 deployed to the Pacific with its new SBD-4s, 1612 was sent to the “Great Lakes Navy” at Naval Reserve Air Base (NRAB) Glenview IL and its Carrier Qualification Training Unit (CQTU). Here it trained pilots to land aboard the converted paddlewheeler USS Wolverine. On November 23, 1942 it crashed during a training sortie and became one of 38 Dauntless’ to end up on the bottom of Lake Michigan. In 1994 #1612 was recovered and passed through several museums before arriving at the FLAM at MCAS Miramar where it is undergoing extensive restoration. 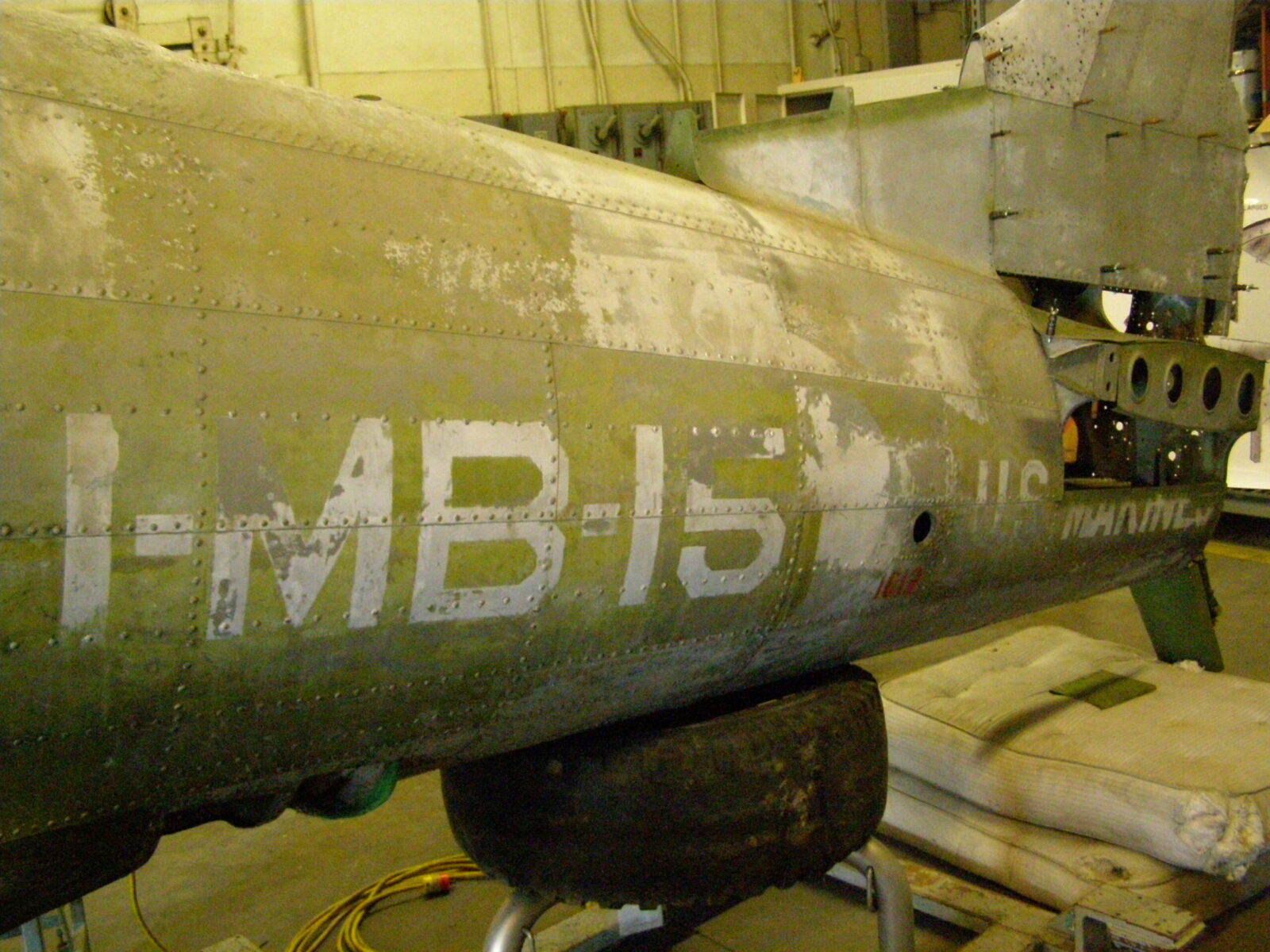