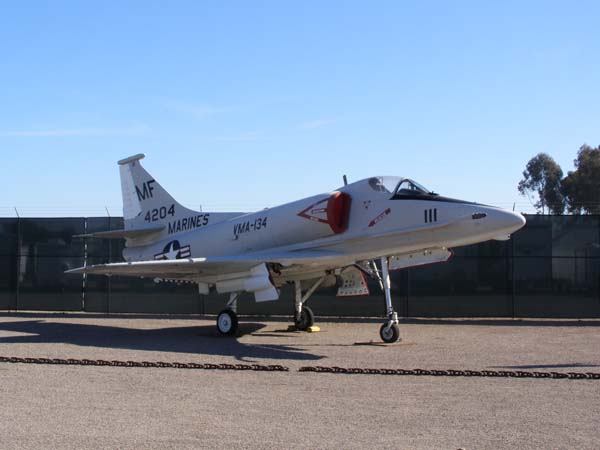 The Douglas A-4 Skyhawk is a single seat subsonic carrier-capable attack aircraft developed for the United States Navy and United States Marine Corps in the early 1950s. The delta winged, single turbojet engine Skyhawk was designed and produced by Douglas Aircraft Company, and later by McDonnell Douglas. It was originally designated A4D under the U.S. Navy’s pre-1962 designation system.

The Skyhawk is a relatively lightweight aircraft with a maximum takeoff weight of 24,500 pounds (11,100 kg) and has a top speed of more than 670 miles per hour (1,080 km/h). The aircraft’s five hardpoints support a variety of missiles, bombs and other munitions. It is capable of carrying a bomb load equivalent to that of a World War II–era Boeing B-17 bomber and can deliver nuclear weapons using a low-altitude bombing system and a “loft” delivery technique. The A-4 was originally powered by the Wright J65 turbojet engine; from the A-4E onwards, the Pratt & Whitney J52 engine was used.

The A-4F began serving fleet units in 1967 and was the first Skyhawk variant specifically designed for use in Vietnam. It was only assigned to Pacific coast squadrons and was never deployed with the Atlantic fleet. The primary threat to pilots flying over Vietnam came from ground fire and anti-aircraft artillery. To give the pilot more protection, armor plating was placed around the cockpit, and additional bullet and flak resistant materials were added throughout the airframe. It also had an ejection seat that could function even when the plane was stationary. In addition, the F had upgraded electronics and avionics housed in a “hump” atop the fuselage.

Our A-4F (BuNo 154204) was accepted by the Navy’s VA-23 “Black Knights” in August 1967 and joined the squadron aboard USS Ticonderoga (CV 13) on Yankee Station as a replacement aircraft. In February 1968 ‘204 remained on Yankee Station when it was transferred to the “Blue Blazers” of VA-93 aboard the USS Bonhomme Richard (CV 31) where it conducted missions supporting the U.S. Marines at the battle of Khe Sanh. On May 28, 1968 it was sent to the Fleet Air West Repair Facility (FAWPRA) at NAS Atsugi for major repairs. After the repairs were completed it was moved to the Combat Operational Support Activity (COSA) at NAS Atsugi for reassignment. It was picked up by the “Blue Tail Flies” of VA-153 aboard the USS Coral Sea (CV 43) on their way back to the states. Upon its return to NAS Lemoore it was transferred to the “Rampant Raiders” of VA-212 and returned to Vietnam aboard the USS Hancock (CV 19) in August 1969.

After a successful deployment it joined VA-127 “Royal Blues” where it to provided advanced all-weather jet instrument training for fleet replacement pilots and refresher training for light jet attack pilots. During its 5 year stint with VA-127 it was briefly loaned to VX-4 at NAS Pt. Mugu to conduct guided missile testing.

It returned to combat duty with VA-55 “Warhorses” and back aboard the USS Hancock for its last Vietnam deployment where it participated in Operations Frequent Wind, Eagle Pull and Blue Sky. When the USS Hancock returned to Naval Station Alameda, California, ‘204 stayed on base and was transferred to the Marine Corps Reserve’s “Dragons” of VMA-133 (MAG 42) at NAS Alameda. It remained with the Dragons for 14 years until October 1989 when it was transferred to the Naval Reserve and VFC-13 “Saints” as an adversary aircraft providing Dissimilar Air Combat Training (DACT) at NAS Miramar. It was here that its characteristic avionics “hump” was removed. In 1991 it was removed from service and placed on display at the museum at MCAS El Tr. This aircraft is on loan from the National Museum of the Marine Corps.