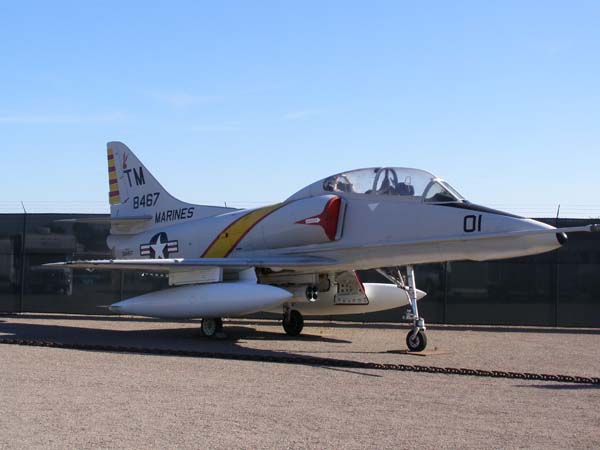 The basic role of the TA-4J Skyhawk was a two-place, lightweight, high-performance trainer capable of operating from an aircraft carrier or shore base. The TA-4J Skyhawk entered production in June 1969. It became the longest-serving of the Skyhawks as the US Navy’s standard advanced jet trainer until replaced in the early 1990’s with the T-45A Goshawk. There were two trainer variants of the A-4 Skyhawk, the TA-4F and the TA-4J. The TA-4J was simpler than the TA-4F, as it had down-rated engines and simplified avionics.

In order to create a two place Skyhawk, Douglas built a 28 inch plug into the A-4E between the normal cockpit and the fuselage fuel tank, which was reduced in size somewhat to accommodate the change.  Pratt & Whitney’s J52-P8A/P8B turbojet engine powered the TA-4F. The jet was also equipped with nosewheel steering, lift-improving wing spoilers, and a pair of Escapac 1C-3 ejection seats. TA-4Fs began service with VA-125 Rough Raiders at NAS Lemoore in California in 1966. Some of them were modified with additional mission equipment and pressed into service as Marine Corps fast forward air controllers (FastFACs) in Vietnam.

Thousands of student naval aviators finished their training flying TA-4J Skyhawk advanced jet trainers. The TA-4J was essentially a TA-4F without the weapons systems or the ability to carry a buddy pod for fuel transfer capability. The J model was powered by a less beefy but still spry J52-P6 engine. The first TA-4Js entered service with Training Squadron TWO ONE (VT-21) Fighting Redhawks at NAS Kingsville in Texas during 1969. Subsequently about 100 of the original TA-4Fs were modified to TA-4J specifications, although many of these aircraft retained their J52-P8A/P8B engines. In addition to training student naval aviators, both TA-4Js and TA-4Fs flew with many of the same aggressor units as the single seat Skyhawks did.

23 TA-4Fs were reworked at Naval Air Rework Facility (NARF) Pensacola for the Marine Corps. The Leathernecks needed an updated FastFAC aircraft, and this new configuration was designated OA-4M. TA-4Fs were modified with the avionics and most of the mission equipment found in the A-4M. Originally the OA-4M was to be powered by the P&W J52-P408 but ended up being pushed around by the J52-P8A/P8B from the TA-4F instead. The two place OA-4Ms were humpbacked and sported the curved refueling probe first seen on the A-4F. OA-4Ms were operated primarily by Marine Corps Headquarters and Maintenance (H&MS) squadrons. Many were sold off to other governments when Marine Corps requirements changed and they were no longer needed by the Marines.

The TA-4J on display entered Naval service on May 18th, 1972 with the VT-7 “Eagles” at NAS Meridian, MS, where student aviators completed their advance jet training. In July 1992 it was on a cross-country training flight leaving MCAS El Toro when it ran off the end of the runway and into a strawberry patch after an aborted takeoff. It came to a stop with its nose buried in the ground approximately 200 yards past the end of runway Seven Left. The two aircrew, a student and instructor pilot, walked away from the incident unharmed. The aircraft however was determined to be beyond economical repair and assigned to the Flying Leatherneck Aviation Museum which at the time was at MCAS El Toro. This aircraft is on loan from the National Museum of the Marine Corps and is painted in the colors of H&MS-11 which flew the TA-4F as a FastFAC in Vietnam.