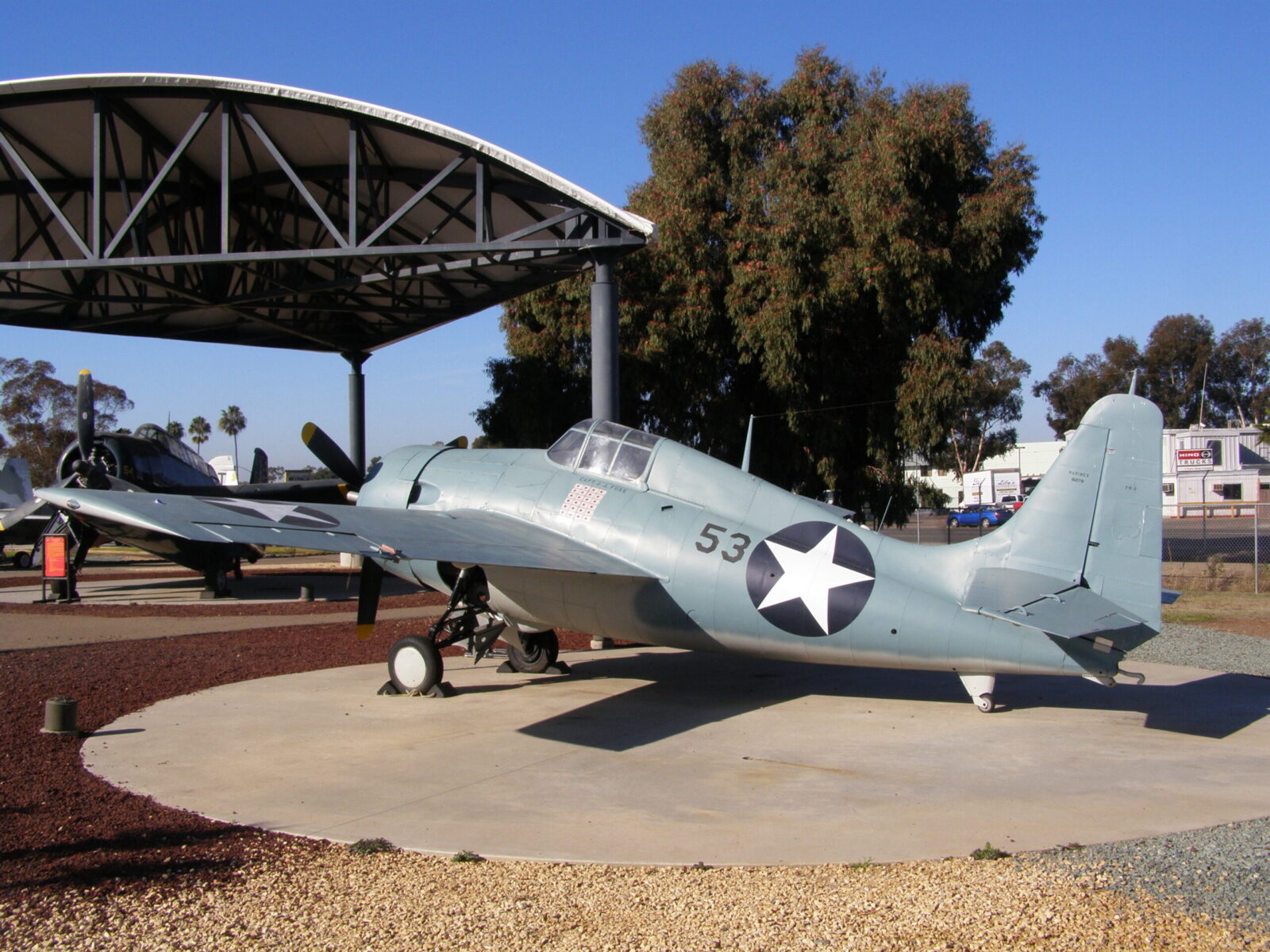 The FM-2 on display is one in the line of production models of the better known F4F Wildcat which was one of the first successful monoplanes designed for carrier use. First used in combat by the British in the North Atlantic, the Wildcat was the only effective fighter available to the United States Navy and Marine Corps in the Pacific Theater during the early part of World War II in 1941 and 1942.

The F4F’s finest hour in the Marine Corps’ history came during the Battle of Guadalcanal. After the Marines on land secured Henderson Field, the Navy sent SBDs and F4F-4 Wildcats flown by Marine pilots. Without them, the Japanese might have retaken the island. Despite having low supplies of parts and fuel and operating in difficult conditions, the Marine SBDs and F4Fs provided outstanding support. They defended the island against Japanese fighters and bombers and strafed ships attempting to bombard American positions or resupply Japanese forces on the island. It was difficult and chaotic, and there were many losses. Nevertheless, the “Cactus Air Force,” as it was called, held on. Due to their efforts, the Battle of Guadalcanal became a major turning point in Pacific Theater of World War II.

The FM-2 was the most numerous and best performing Wildcat with an engine creating 1,350 horsepower, bigger vertical tail surfaces and more fuel capacity, earning the name the “Wilder Wildcat.” In addition to being faster and more maneuverable than the F4F, the FM-2 had four wing guns versus six in the F4F-4 allowing the aircraft to carry 1,720 rounds of ammunition vs 1,440 in the F4F making it much more formidable opponent for the Japanese Zero.

This FM-2 (Bureau Number 16278) was accepted by the US Navy on January 12, 1944. Its first few months of service is unclear but it did appear in the South Pacific in October 1944 with Combat Aircraft Support Unit (Forward) – Twenty (CASU(F)-20) on the island of Roi, supporting Marine Aircraft Group (MAG) 31 during the battle of Kwajalein. It then was moved to Majuro providing island defense for 4 the Marine Air Wing and MAG-13. 16278 was sent back to San Diego for reconditioning and then on to NRAB Glenview and the Carrier Qualification Training Unit (CQTU). It crashed into Lake Michigan on June 26, 1945. It was recovered in the 1990’s and restored at the National Museum of Naval Aviation in Pensacola, Florida.

The aircraft is painted to represent Joe Foss’s Wildcat “Black 53” which he flew during the Guadalcanal campaign. Foss ended World War II with 26 confirmed enemy aircraft kills, making him the Marine Corps’ highest-ranking Ace. This aircraft is on loan from the National Museum of Naval Aviation. 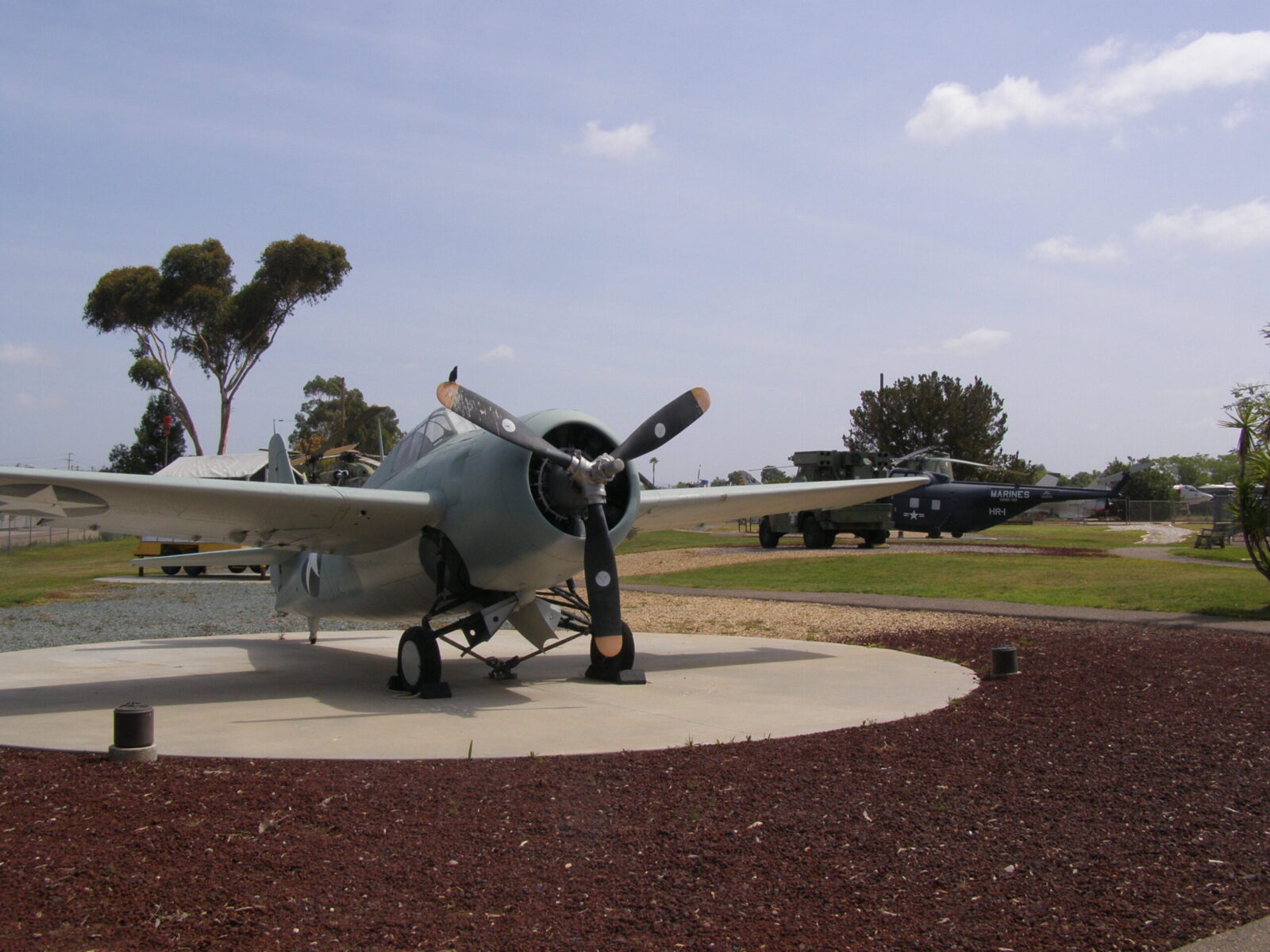