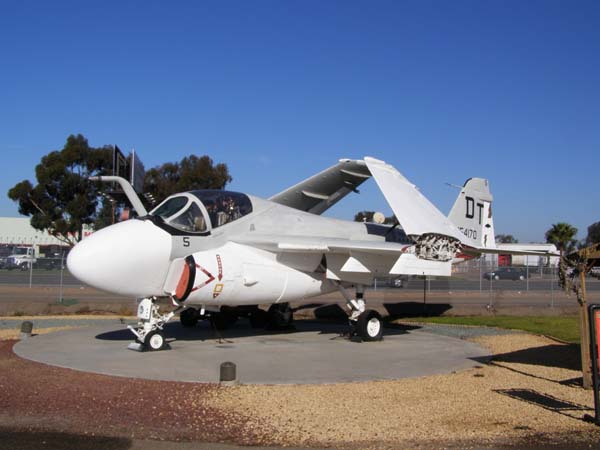 The Navy’s experience in the Korean War showed the need for a new long-range strike aircraft with high subsonic performance at very low altitude–an aircraft that could penetrate enemy defenses and find and destroy small targets in any weather.

The Grumman A-6 Intruder was designed with these needs in mind. The Intruder first flew in 1960 and was delivered to the Navy in 1963 and the Marine Corps in 1964. The Marine Corps operated Intruders with distinction for many years. Marine Corps All Weather Attack Squadrons VMA(AW)-121 Green Knights, VMA(AW)-224 Bengals, VMA(AW)-225 Vagabonds (later Vikings), VMA(AW)-242 Batmen (later Bats), VMA(AW)-332 Moonlighters (earlier Polkadots), VMA(AW)-533 Hawks, and VMAT(AW)-202 Double Eagles (Fleet Replacement Squadron) all flew the A-6.

The heart of the A-6A was the Digital Integrated Attack Navigation Equipment (DIANE) system, which provided an electronic display of targets and geographical features even in low visibility conditions. The design of the Intruder was driven by the size of the two radars needing to be installed in the nose as well as desire to improve crew coordination by seating them side by side in the cockpit. The Intruder‘s large blunt nose and slender tail inspired a number of nicknames, including “Drumstick”, “Double Ugly”, and “Iron Tadpole.”

The A-6E was the most capable version of the Intruder. The E model Intruder incorporated improvements to the majority of the mission systems and uprated J52-P8B engines. The two radars in previous variants were incorporated into a single multi-mode radar and much of the 1950s and 1960s era circuitry was updated to more modern and reliable equipment. The A-6E underwent a number of incremental upgrades over the next 20 years. The Target Recognition Attack Multi-sensor (TRAM) was added beginning in 1974 and by the mid-1980s all fleet Intruders had been updated to the A-6E TRAM variant.

A-6A (Bureau Number 154170 was accepted by the Navy in March 1968 and sent to the Naval Weapons Evaluation Facility (NWEF) at Kirtland AFB, NM. It was here that the Navy tested and certified all nuclear capable fighter and attack aircraft. Following ordnance related accidents aboard USS Oriskany in 1966 and USS Forrestal in 1967, NWEF also applied their protocols to conventional weapons handling for all Navy aircraft. After a short stay in New Mexico, ‘170 continued west and joined the Golden Intruders of VA-128, the west coast A-6 Fleet Replacement Squadron at NAS Whidbey Island. After two years of training Pilots and Bombardier Navigators (BNs) for the fleet, it joined the Eagles of VA-115. It left for Vietnam on April 16, 1971 aboard USS Midway (CV-41) for single carrier operations on Yankee Station. Immediately after its return from deployment ‘170 returned to VA-128 and spent another 3 1/2 years training aircrews for the fleet. In June 1975 it was sent back to the Grumman factory to be upgraded to the A-6E variant. It returned to VA-128 in October 1976 where it spent a year before being transferred to the Main Battery of VA-196, also at NAS Whidbey Island. While with VA-196 it made 3 WESTPAC deployments with Carrier Air Wing (CVW)-14, two aboard USS Enterprise (CVN-65) and one aboard USS Coral Sea (CV-43). Following a depot period back at the Grumman factory, ‘170 returned in 1983 to the west coast as a test aircraft. Its first stop was the Pacific Missile Test Center at NAS Point Mugu. It was there for 2 years before heading to NAF China Lake and the Vampires of VX-5 and the Naval Air Warfare Center Weapons Division, where it was used to develop and evaluate tactics and techniques for airborne weapons delivery. It was retired in 1996 and flown to the Flying Leatherneck Aviation Museum at MCAS El Toro. This aircraft is on loan from the National Museum of the Marine Corps.