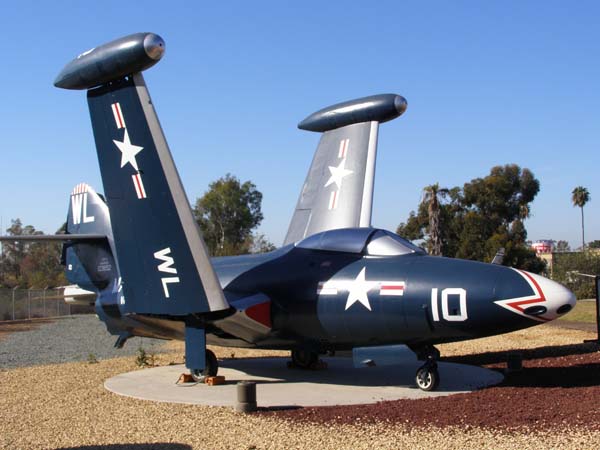 The Panther was one of the Navy’s first successful carrier-based jet fighters. While its contemporaries, like the Banshee, made significant contributions to the Korean War effort, they did not have nearly the same record as the Panther. It was the Navy’s and Marines’ most widely used jet, flying over 78,000 sorties during the Korean War. It was highly maneuverable and relatively fast and had considerable success against its superior adversary the MiG-15.

Grumman’s cautious nature in new technologies meant it was the last aircraft manufacturer to enter the jet age. They selected the British Rolls-Royce “Nene” centrifugal-flow turbojet engine to power the F9F. Grumman didn’t want new engine issues to complicate the new airframe development process. Congress had previously dictated that no foreign engines could be imported into the United States for production aircraft therefore the Navy induced Pratt & Whitney to obtain a license to build production Nenes in the United States.

The Nene was also the basis for the MiG-15’s Klimov VK-1 turbojet. Note the similar rear fuselage shape of the two aircraft.

The Panther was the primary Marine Corps jet fighter and ground attack aircraft in the Korean War.Arriving in Korea on December 7, 1950, VMF-311 was the first land-based Marine jet squadron to be used in combat providing close air support for the Marines and Soldiers on the ground. In late-June 1952 the squadron participated in the attack on the Sui-ho Dam. Additionally, the squadron pioneered strip-alert tactics still practiced today. Legendary pilots during this era included later Astronaut and Senator John Glenn and baseball star Ted Williams. In over 2½ years of action in Korea the squadron amassed 18,851 combat sorties

In 1949, VMF-115 was the first Marine Corps squadron equipped with Grumman F9F-2 Panther jets, and on November 20, 1950, the first Marine squadron to carrier qualify all 18 pilots aboard the USS Franklin D. Roosevelt (CV-42). The squadron then deployed to Pohang, Korea (K-3), for combat operations in February 1952. In late June 1952 they participated in the attack on the Sui-ho Dam. A total of 15,350 flight hours were logged on 9,250 combat sorties with a price of 19 aircraft lost. Six pilots were lost with their aircraft in a single day and a total of 14 pilots were killed in action. Close air support was provided by VMF-115 in battles such as Bunker Hill, The Hook, Reno, Carson-Elko, Vegas, Berlin, East Berlin, and the U.S. Marines famous battle at the Chosin Reservoir.

The last Panthers were flown by the US Marines in 1957, while some Naval Reserve aircraft remained in service a few years longer.

The F9F-2 Panther on display was delivered to the US Navy on October 20, 1950. It was first assigned to Fighter Squadron 721 (VF-721) aboard the aircraft carrier USS Boxer where it saw service in the skies over Korea. It later served with VF-821, VF-51, and Naval Training Units at Naval Air Stations Glenview, Kingsville, Memphis, Corpus Christi, Sherman Field, and Jacksonville. It was retired in 1956 with 1,575 airframe hours. It is painted as a VMF-311 aircraft flown by Captain W.A. Bloomer, who years later as Brigadier General Bloomer, Commander Marine Corps Air Bases West, and was instrumental in helping establish the Flying Leatherneck Aviation Museum. 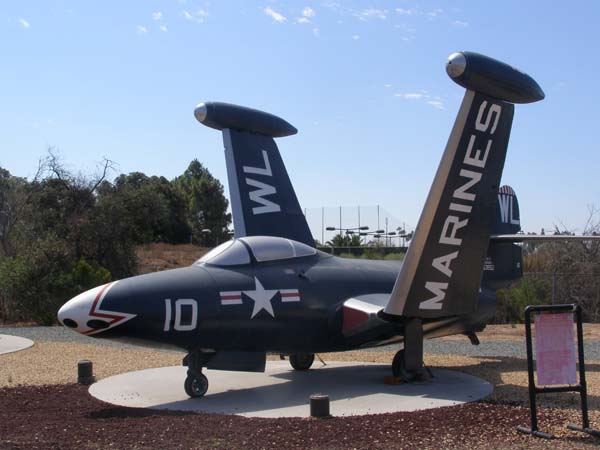