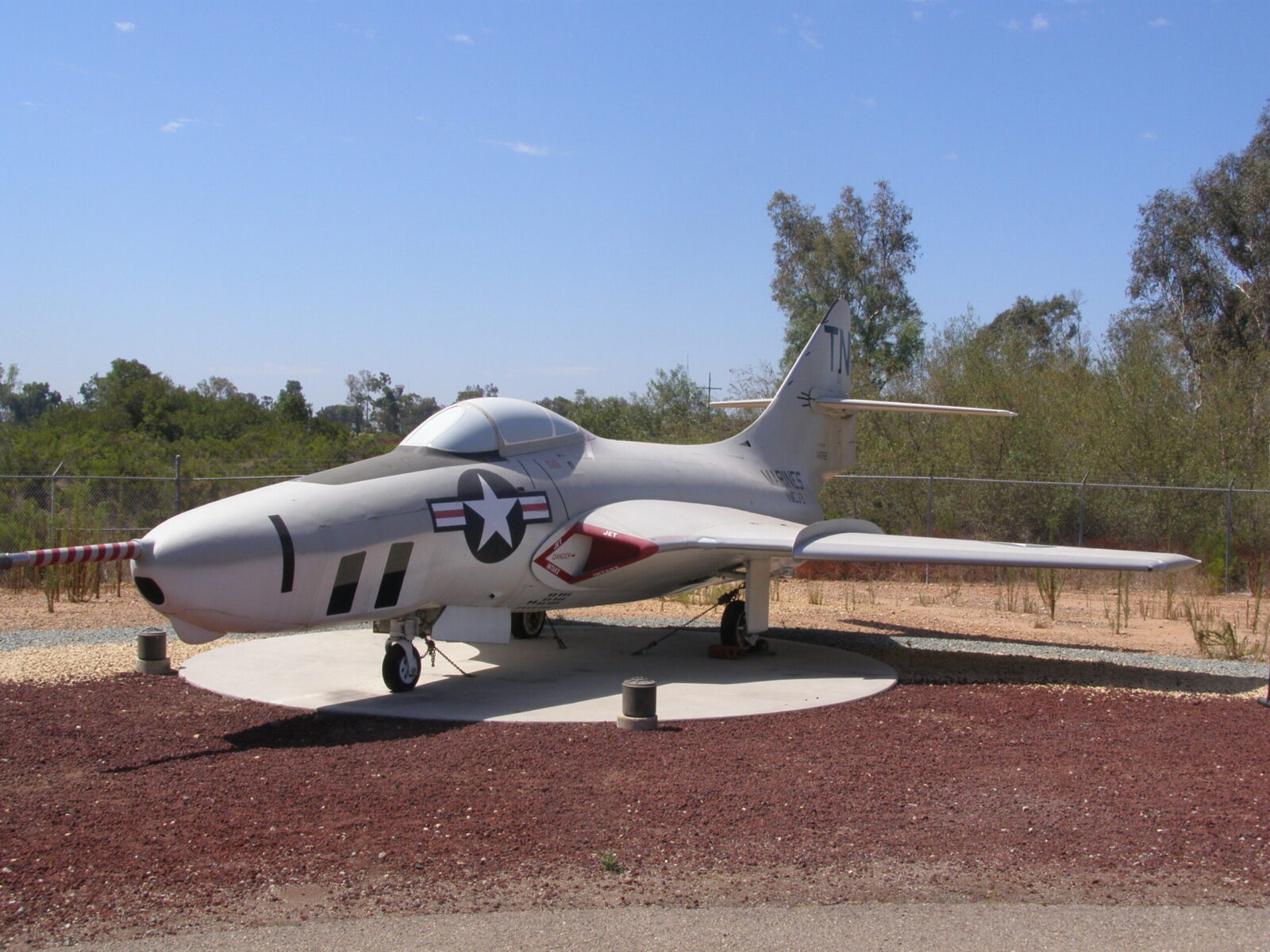 The Grumman F9F/F-8 Cougar is a carrier-based fighter aircraft developed for the United States Navy and United States Marine Corps. Based on Grumman’s earlier F9F Panther, the Cougar
replaced the Panther’s straight wing with a more modern swept wing and added thrust..

The Navy considered the Cougar an updated version of the Panther, despite having a different official name. It was developed in response to the military’s experiences fighting the Russian MiG-15. While straight-wing fighters like the F9F Panther did shoot down some MiG 15s, the MiG-15’s swept wing still made it faster and more maneuverable.

The Cougar was known to be highly maneuverable, easy to fly and had a higher dive speed limit (Mach 1.2), a high maneuvering limit of 7.5-g and greater endurance than the Panther. Unfortunately, the Cougar arrived too late to be used in the Korean War, so it was never tested against the MiG-15 and was later surpassed by faster and newer fighter planes like the Crusader and Skyhawk, limiting its use during the Vietnam War. The only version of the Cougar to see combat was the TF-9J trainer (known as F9F-8T until 1962. Detachments of four Cougars served with US Marines Headquarters and Maintenance Squadron 11 (H&amp;MS- 11) at Da Nang and H&MS-13 at Chu Lai, where they were used for fast-Forward Air Control and the airborne command role, directing airstrikes against enemy positions in South Vietnam between 1966 and 1968.

The F9F-6P photo Cougar replaced the F9F-5P photo Panther in two Navy and two USMC squadrons in 1954. VMCJ-2 was based at MCAS Cherry Point and VMCJ-3 was based at MCAS El Toro. The -6P was replaced in 1956 by the more capable F9F-8P photo cougar of which 110 aircraft were built. F9F-8P’s were replaced by the supersonic F8U-1P photo Crusader starting in 1958 with the last F9F-8P retiring from the fleet in early 1961.

The F9F-8P Panther on display is one of 110 photo-reconnaissance variants produced in the 1950s. It has a longer nose to accommodate the modification which included elimination of the guns and related equipment and incorporation of photographic equipment and an automatic pilot. Its systems allow it to perform reconnaissance and mapping operations both during the day and at night. At the end of its service life in 1960, it was replaced by the F8U-1P (RF-8), which is also on display at this museum.

F9F-8P 141722 was delivered to the Marine Corps on August 21, 1956 and assigned to Marine Composite Reconnaissance Squadron 3 (VMCJ-3). It served its entire service life with that squadron at MCAS El Toro, CA and MCAS Iwakuni, Japan. In October 1959, after accumulating 1,196 hours it was stored with the Bureau of Naval Weapons at NAS Alameda. It was struck from service on May 19, 1960. This aircraft is on loan from the National Museum of the Marine Corps.