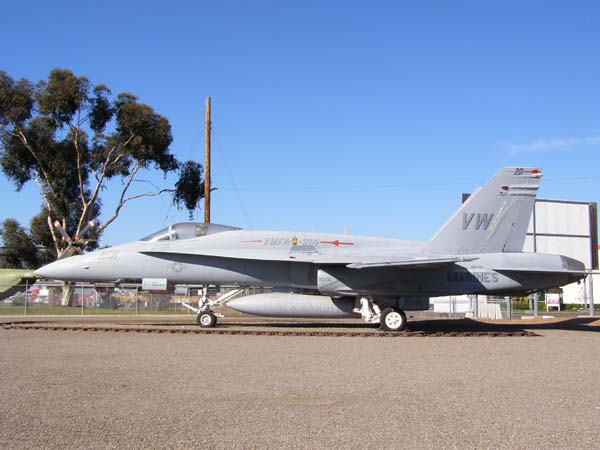 The McDonnell Douglas F/A-18 Hornet is a twin-engine, supersonic, all-weather, carrier-capable, multirole combat jet, designed as both a fighter and attack aircraft (hence the F/A designation) as a replacement for the F-4 Phantom II and F-14 Tomcat as fighters, and the A-6 Intruder, A-4 Skyhawk and A-7 Corsair II as attack aircraft. Designed by McDonnell Douglas (now Boeing) and Northrop, the F/A-18 is flown by both the United States Navy and Marine Corps.

It had both the maneuverability to engage other fighters and the ability to attack ground targets. This, combined with its ease of maintenance, makes it highly cost-effective and versatile. It can carry a wide variety of weapons, allowing it to respond quickly to a rapidly changing battlefield.

The F/A-18 first saw combat action in April 1986, when VFA-131, VFA-132, VMFA-314, and VMFA-323 Hornets from USS Coral Sea flew Suppression of Enemy Air Defense (SEAD) and bombing missions against Libyan air defenses during Operation Prairie Fire and an attack on Benghazi as part of Operation El Dorado Canyon. The Hornet has been used extensively by both the Navy and Marines  in Operations Desert Storm, Enduring Freedom, and Iraqi Freedom.

The F/A-18A was developed at the same time as the F/A-18B, a two-seat version used primarily for training. The additional seat was the only change between the A and B. Another single and double seat pair, the F/A-18C and D, were developed in 1987. The C and D introduced systems that allowed it to fire AMRAAM air-to-air missiles and Maverick air-to-ground missiles. Two years later, additional upgrades improved its night attack and low-visibility capabilities by adding night vision goggle capability and ground-mapping radar. The D could also be used for training, but it was used in combat more often than the F/A-18B. The Weapon Systems Officer (“WSO”) operates the weapons and sensors systems, allowing it to more efficiently carry out missions like forward air control and reconnaissance. The newest variants of the Hornet family are the F/A-18E and F Super Hornets. Again, the E is single seat while the F is a two-seater. The Super Hornets are 25% bigger, making room for additional fuel and weapons. Importantly, this also leaves room for future advances, extending the F/A-18’s service life.

This F/A-18A on display (BuNo 161749), was the 77th Hornet built by McDonnell Douglas. It was accepted by the Marine Corps on August 8th, 1983 and sent to the first USMC Hornet squadron, the “Black Knights” of Marine Fighter Attack Squadron 314 (VMFA-314) at MCAS El Toro, California. On May 22nd 1985 it was sent to the Naval Air Rework Facility (NARF) at NAS North Island for upgrades. On October 26th 1985, it was transferred to VFA-125 “Rough Raiders”, the west coat Navy F/A-18 training squadron. In June 1986 it returned to NARF North Island for more upgrades. Upon leaving the NARF it rejoined VMFA-314 and served there until it was removed from service in 1996 and sent to the Flying Leatherneck Museum. This aircraft is on loan from the National Museum of the Marine Corps 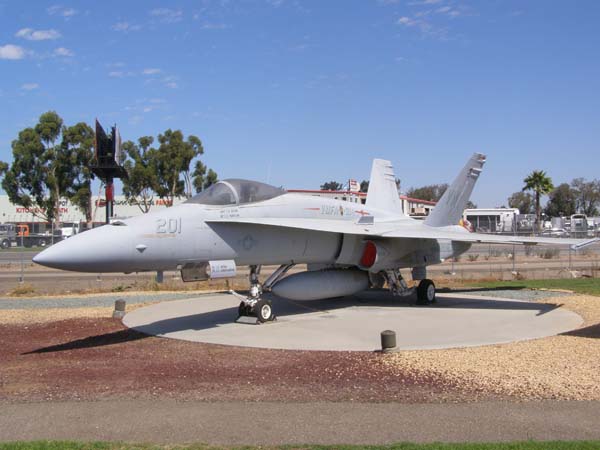