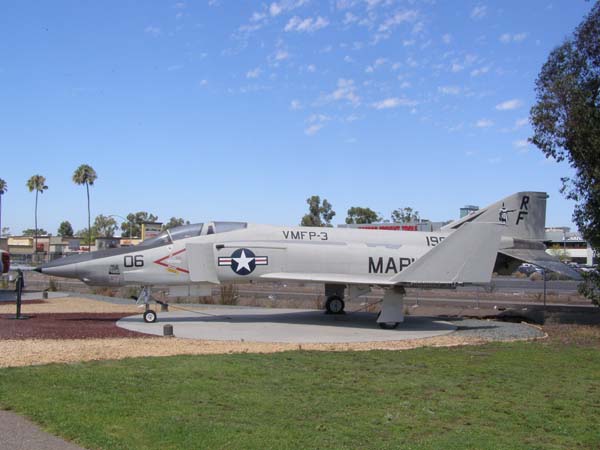 The McDonnell Douglas RF-4B was the photo reconnaissance version of the versatile F-4 Phantom II. It first flew on March 12, 1965 with the first delivery going to Marine Composite Utility Squadron Three (VMCJ-3), based at MCAS El Toro, in May of 1965. The RF-4B also served with Marine Composite Squadrons VMCJ-1 and VMCJ-2, and entered combat in October 1966, equipping VMCJ-1 at Da Nang, Republic of Vietnam.

All 46 RF-4Bs produced by the McDonnell Aircraft Company went to the Marine Corps with the last RF-4B delivered on December 24, 1970. The last twelve of these RF-4Bs were built on RF-4C frames with larger tires, wheel wells and reinforced wings. Differing from the fighter version of the F-4, the RF-4B had a longer nose that housed forward and side oblique cameras, and featured photoflash cartridges for night photography. Film could also be developed in flight and film cassettes could be ejected at low altitude so that ground commanders could get aerial intelligence as rapidly as possible. The large AN/APQ-72 radar was also replaced with the much smaller AN/APQ-99 forward-looking J-band monopulse radar which was optimized for terrain avoidance and terrain-following, and could be used for ground mapping.

Initially each active duty Marine Aircraft Wing (MAW) had operational squadrons that supplied separate photo reconnaissance and electronic countermeasure aircraft. In 1975, the entire photo reconnaissance mission of the Marine Corps was assigned to VMCJ-3 of Third Marine Aircraft Wing (3rd MAW) and the squadron was soon redesignated as Marine Photo Reconnaissance Squadron Three (VMFP-3). The squadron then supplied detachments to the users, both Navy and Marine. The last RF-4B in Marine Corps service was retired in 1990, prior to Desert Storm.

The RF-4B Phantom II on display was initially accepted on 15 October 1965 and delivered to VMCJ-3 at MCAS El Toro, spending its entire service with that squadron and its successor, VMFP-3. ‘1981’s career included deployments to MCAS Cherry Point, MCAS Iwakuni and multiple detachments aboard USS Midway (CV-41). It was retired on April 25, 1990 with 5,364 airframe hours and presented to the Command Museum. It is painted in the colors of Marine Photo Reconnaissance Squadron Three, (VMFP-3), while based at MCAS El Toro. This aircraft is on loan from the National Museum of the Marine Corps. 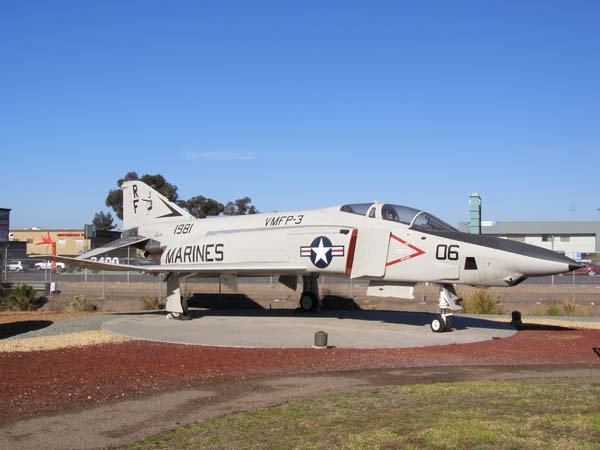