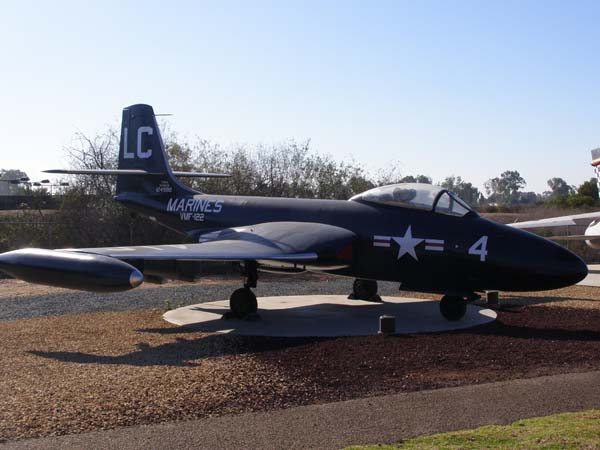 The McDonnell F2H Banshee was a single-seat carrier-based jet fighter aircraft flown by the United States Navy and Marine Corps from 1948 to 1961 and was one of the primary American fighters used during the Korean War. Due to its good performance at high altitude, it initially proved its worth as an escort for long-range USAF bomber formations. As the war progressed, USN and USMC fighters were primarily assigned to ground attack missions, including close air support and destruction of the North Korean Army’s supply lines.

The Banshee was a development of the FH Phantom, although it was being planned before the Phantom went into production. McDonnell engineers originally intended the aircraft to be a modified Phantom that shared many parts with the earlier aircraft, but it soon became clear that the need for heavier armament, greater internal fuel capacity, and other improvements would make the idea unfeasible.
In contrast to later jets, Navy Korean War-era jets like the Banshee had straight wings. Swept wings allow jets to reach greater speeds. The Navy, though, resisted using swept-wing jets at first because they were harder to land on aircraft carriers. This left the F2H Banshee at a disadvantage against more advanced fighters like the MiG-15.

Two Marine Corps squadrons flew the F2H-2 from 1949-1952, both were based at MCAS Cherry Point and each made one deployment to the Mediterranean.

Marine Photo Reconnaissance Squadron One (VMJ-1) flew the F2H-2P Photo Banshee from its K-3 base near Pohang in South Korea beginning in 1952 .The J-1 Banshees were considered the best of the photo reconnaissance aircraft in Korea and the squadron was credited with providing the highest percentage of the film taken by any unit in the Far East Air Forces and was assigned to the highest value targets ranging from the Main Line of Resistance to the Yalu River on the China border. The Banshees were often engaged by Mig-15s and were usually escorted by F-86 fighters. One of VMJ-1’s famous enlisted pilots MSGT. Ed Chestnut, was quoted as saying “Sure, an F2H will outrun a Mig, if you don’t mind putting the nose down and popping a few revets!”

After the Korea War the Banshees of VMJ-1 under their CO and WW II ACE Lt. Col Marion Carl were tasked to conduct clandestine photo missions over China which added to the squadron and their CO’s fame. The Banshees were later replaced by the F9F Panther and Cougars.
VMF-114 and VMF-533 turned in their F4U Corsairs and entered the jet age in 1953 with the F2H-4 Banshee. Both squadrons were based out of MCAS Cherry Point and saw several carrier before transitioning to the F9F Cougar in 1957.

The Banshee on display was delivered to the U.S. Navy on June 28, 1951, and was assigned to Fleet Aircraft Service Squadron (FASRON-104) at Port Lyautey, Morocco. In June 1952 it was assigned to VF-22 at NAS Jacksonville. In May 1953 it was transferred to VF-172 also based at NAS Jacksonville. In February 1954 it saw service with VF-12 at NAS Cecil Field and deployed with Carrier Group 1 aboard USS Midway (CVA-41) for an around the world cruise. In 1959 it was loaned to Westinghouse Aviation Gas Turbine Div. in Kansas City for engine research and development. This Banshee was retired in 1961 with 1,704 total airframe hours. It is displayed with markings of the “Candystripers” of VMF-122. It is on loan from the National Museum of the Marine Corps. 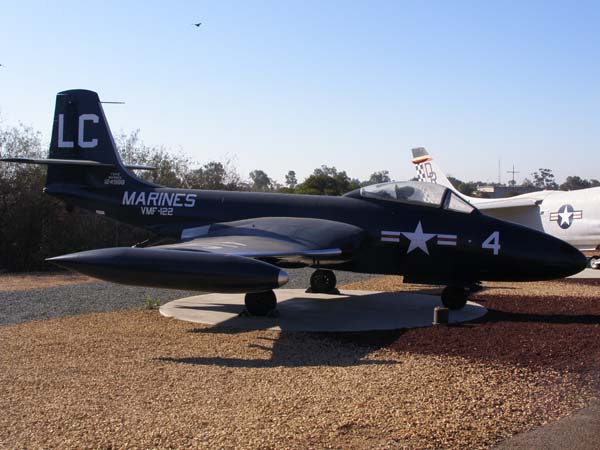 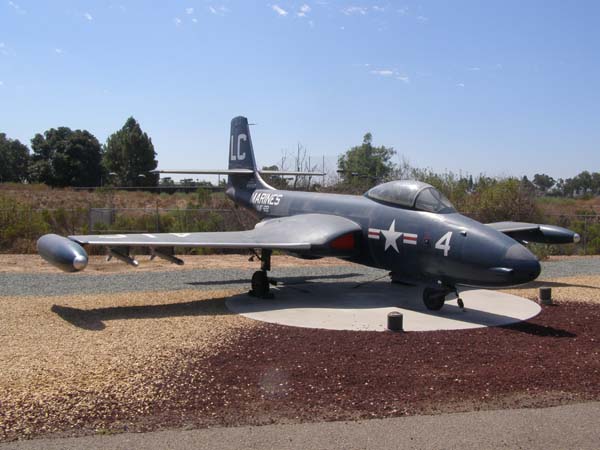