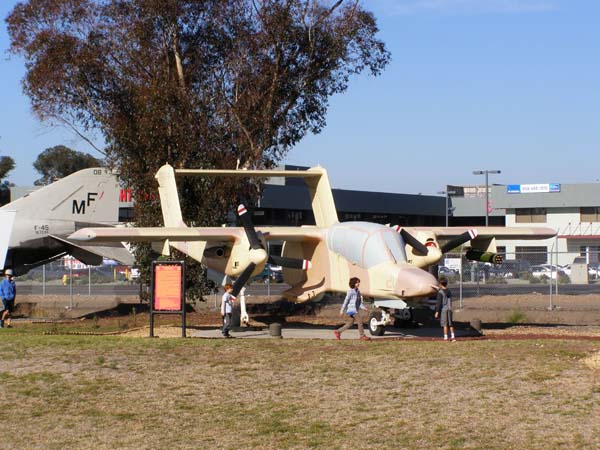 It was the embodiment of versatility and bridges the gap between helicopters and jets. Like a helicopter, it could perform multiple missions in remote areas. It could carry a wide variety of weapons and equipment and was designed to be able to operate from anywhere. Unlike jets, its jointed landing gear allowed it to make short take offs and landings (STOL) on rough and soft ground. It was faster than a helicopter and more maneuverable than a jet. It was also easier to maintain. If necessary, it could function on automotive fuel, which was more readily available. Repairs could be made with ordinary hand tools.

The Bronco represents an important step in the development of forward air control (FAC) aircraft during the Vietnam War, being the first aircraft designed specifically for this role. Forward air controllers provide guidance to ground attack aircraft by spotting and marking enemy targets, ensuring that they hit the enemy rather than friendly forces in the vicinity. FAC aircraft flew low and slow over enemy positions. This made them vulnerable to ground fire. The Bronco’s predecessors, like the Cessna L-19 Bird Dog, were based on civilian planes, so they had no armament or protection. The Bronco not only includes weapons hard points, but it also had self-sealing fuel tanks. Additionally, it has a high-visibility canopy.

There were many variants of the OV-10 Bronco. Several were designated separately for export to countries like Germany, Thailand, Venezuela, and Indonesia. The specifications of these variants were like the OV-10A. The next major American variant was the OV-10D. It remedied the OV-10A’s vulnerability against adversaries and anti-aircraft fire by including chaff countermeasures and infrared-suppression. Additionally, the OV-10D included bigger engines, an extended nose, a night-vision system, larger propellers, and a nose-mounted camera.

Our OV-10 (BuNo 155494) was accepted by the Marine Corps on January 16th, 1969 and became one of 18 Broncos loaned to the Navy’s Light Attack Squadron (VAL-4) which was established with the mission of conducting surveillance and offensive operations in support of river patrol craft, as well as providing air support for SEALS and combined U.S. Army, Navy and South Vietnamese operations, complementing the operations of HA(L)-3 Hueys.‘494 was based at Binh Thuy Air Base, South Vietnam, for combat operations. On April 10th,1972 VAL-4 was disestablished and it was sent to the Philippines for shipment back to the United States. In September 1972 ‘494 was returned to the Marine Corps and was placed with VMO-2 at Camp Pendleton. In June 1976, it was transferred to the Marine Corps Reserve’s VMO-4 at NAS Atlanta, then MCAS New River. In August 1985 it underwent conversion to the OV-10D standard and returned to VMO-2 at Camp Pendleton. In August 1990, VMO-2 made aviation news by launching six OV-10’s on an unprecedented 10,000 mile journey to Saudi Arabia in support of Operation Desert Shield. Beginning in January 1991 the squadron flew a total of 286 combat missions totaling 900 flight hours during Operation Desert Storm. Missions were flown around the clock for the duration of the conflict, focusing primarily on controlling U.S. and Allied artillery, numerous attack aircraft, and naval gunfire, including spotting for the USS Wisconsin’s first combat firing since the Korean War. The squadron performed these demanding and crucial missions despite being targeted by Iraqi surface-to-air missile gunners over 94 times and while trying to avoid large concentrations of antiaircraft artillery. In May 1991, 494 was loaded onto USS Juneau (LPD 10) with other OV-10s from VMO-2 and VMO-1 bound for San Diego. On May 20th, 1993 VMO-2 was disestablished and four days later was flown to MCAS El Toro and the Flying Leatherneck Aviation Museum. 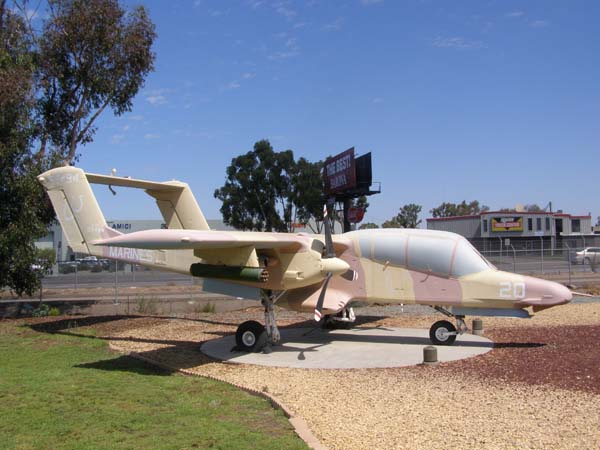