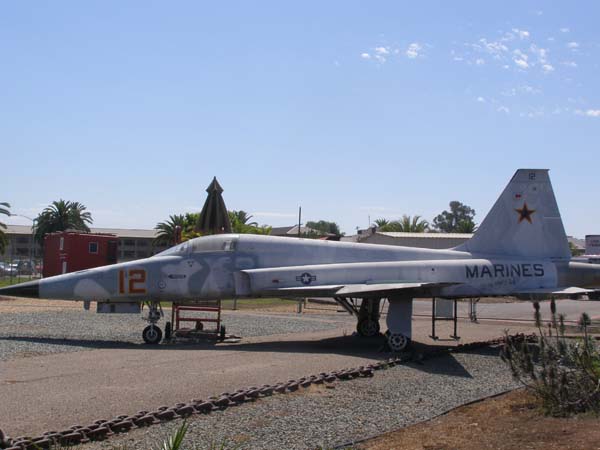 F-5E is part of the F-5 supersonic light fighter family, initially designed in the late 1950s by Northrop Corporation. Being smaller and simpler than contemporaries such as the McDonnell Douglas F-4 Phantom II, the F-5 cost less to both procure and operate, making it a popular export aircraft.

The F-5 started as a privately funded light fighter program by Northrop in the 1950s. The design team wrapped a small, highly aerodynamic fighter around two compact and high-thrust General Electric J85 engines, focusing on performance and a low cost of maintenance. Though primarily designed for a day air superiority role, the aircraft is also a capable ground-attack platform. The F-5A entered service in the early 1960s. During the Cold War, over 800 were produced through 1972 for U.S. allies. Though the United States Air Force (USAF) had no need for a light fighter, it did procure approximately 1,200 Northrop T-38 Talon trainer aircraft, which were directly based on the F-5A.

After winning the International Fighter Aircraft Competition, a program aimed at providing effective low-cost fighters to American allies, in 1970, Northrop introduced the second-generation F-5E Tiger II in 1972. This upgrade included more powerful engines, higher fuel capacity, greater wing area and improved leading edge extensions for better turn rates, optional air-to-air refueling, and improved avionics including air-to-air radar. It has served in a wide array of roles, being able to perform both air and ground attack duties; the type was used extensively in the Vietnam War. A total of 1,400 Tiger IIs were built before production ended in 1987. More than 3,800 F-5s and the closely related T-38 advanced trainer aircraft were produced in Hawthorne, California. The F-5N/F variants are still in service with the United States Navy and United States Marine Corps as adversary aircraft. Approximately 500 aircraft were in service as of 2014.

Our F-5E Tiger II was built by Northrop in Hawthorne, CA as an export fighter originally destined for delivery to South Vietnam and became available when the South collapsed. It was given the serial number 74-01564 and sent to the U.S. Air Force’s 57th Fighter Weapons Wing at Nellis AFB in 1976 when they upgraded from the T-38A Talon. Since the F-5E had approximately the size and performance characteristics of a Soviet MiG-21, it was used to teach adversarial tactics and provide Dissimilar Air Combat Training (DACT) to US Air Force squadrons, The 57th eventually became the 64th Aggressor Squadron where it served as the Commanding Officer’s aircraft. It was transferred to the U.S. Navy and sent to the “Desert Bogeys” of Strike Fighter Squadron 127 (VFA-127) at NAS Fallon, NV, where it provided adversary training to Navy squadrons. It served with VFA-127 until the squadron was disestablished on March 23, 1996. It was transferred to the “Saints” of Fighter Squadron – Composite 13 (VFC-13). The “Saints” assumed the adversary training role at NAS Fallon when the Navy relocated the Naval Fighter Weapons School, or TOPGUN, to NAS Fallon. In 2007 this aircraft was sent to Northrop’s maintenance facility in St. Augustine, FL. When the Navy purchased ex Swiss Air Force F-5N’s the decision was made to retire this aircraft and was struck from Naval inventory. It is on loan from the National Naval Aviation Museum in Pensacola, FL.