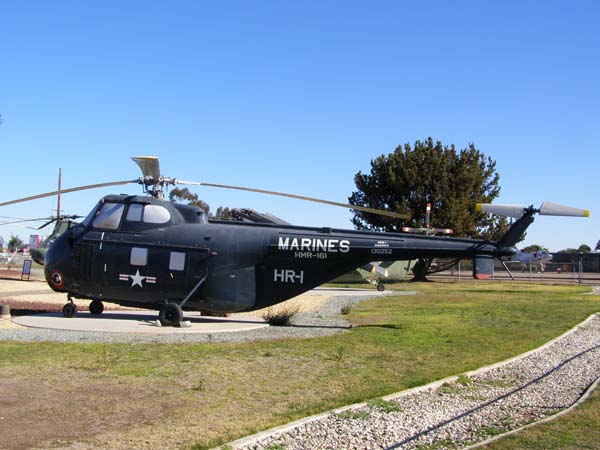 Development of the H-19 was initiated privately by Sikorsky without government sponsorship. The helicopter was initially designed as a testbed for several novel design concepts intended to provide greater load-carrying ability in combination with easy maintenance; a mockup was designed and fabricated in less than one year.

During the Korean War, all branches of the military used the H-19 for cargo transport, troop transport, casualty evacuation, and the recovery of downed pilots and aircraft. It could carry 8 or 10 passengers (depending on the variant), over 1,000 lb. of cargo, or six stretchers. Uniquely, the engine was placed in the nose, freeing up space in the hold and making the engine easier to access for maintenance. The Marines’ HRS-1s played important roles in two military operations during the war. In September 1951, HRS-1s in HMR-161 carried 74 Marines and 18,848 pounds of gear during Operation Windmill I. From February 23-27, 1953, that same unit later lifted 1.6 million pounds of cargo to resupply two regiments during Operation Haylift II. The ability to transport wounded quickly to field hospitals via helicopter caused the number of wounded that died in the Korean War to be the lowest in history. The military’s experiences with the H-19 led to the helicopter becoming an essential part of modern warfare, especially during the Vietnam War.

Before the military changed the aircraft numbering system in 1962, each branch of the military gave their H-19s separate designations. The Marine Corps’ designation was HRS. It had three variants: the HRS-1, HRS-2, and HRS-3. The Marine Corps used their variants to pioneer the use of the helicopter as an assault transport, practicing vertical assault and envelopment tactics. They would transport troops to inaccessible areas behind enemy lines, most often mountain tops. While these experiments were promising, helicopter assaults were not used as consistently as they were in the Vietnam War. Importantly, while these units were under enemy observation, they were not fired upon. The vulnerability of helicopters to ground fire would become clear during the Vietnam War.

The Marine Corps purchased 89 HRS-3s. The HRS-3 was similar to the HRS-2, which introduced some equipment changes, but it had a 700 horsepower Wright R-1300-3. The Navy also used this engine in their HO4S-3s because the engines in earlier variants were deemed underpowered. The HRS-3 and HRS-2 were also longer and higher than the HRS-1.

HRS-3 BuNo 130252 was accepted by the Marine Corps on March 31, 1953 at the Sikorsky factory in East Hartford, CT. It was flown across the country and joined Marine Helicopter Transport Squadron 163 (HMR-163) at MCAS Santa Ana on April 23, 1953. It was transferred to the “Golden Eagles” of HMR-162 prior to their deployment to the far east, arriving in Japan aboard the USS Bataan (CVL-29) August 19, 1953. It remained in Japan until it was transferred to NAS North Island for refurbishment in August 1956. On January 4, 1957 it was sent to the “Flying Tigers” of Helicopter Transport Squadron (Light) 361 (HMR(L)-361) at MCAS Santa Ana. In February 1958 HMR(L)-361 departed for Bikini Atoll aboard USS Boxer (CVS-21) to support the Operation Hardtack nuclear tests. In September 1958 it was transferred to the “Lucky Red Lions” of HMR(L)-363 at MCAS El Toro. It returned to NAS North Island for rework in May 1959 when HMR(L)-363 transitioned to the HUS (UH-34D). It entered service with the U.S. Navy at NAS Atsugi Japan and in June 1962 was assigned to Helicopter Utility Squadron ONE (HU-1) at NAAS Ream Field in Imperial Beach, CA. In October 1964 it returned to Marine Corps service with Marine Aircraft Maintenance Squadron 17 (MAMS-17) at MCAS Iwakuni, Japan. It returned to the depot at NAS North Island in July 1966 and then transferred to the Air Force Military Aircraft Storage and Disposition Center in Tucson, Arizona where it was stricken from inventory with 3,608 total hours. This aircraft is on loan from the National Museum of the Marine Corps. 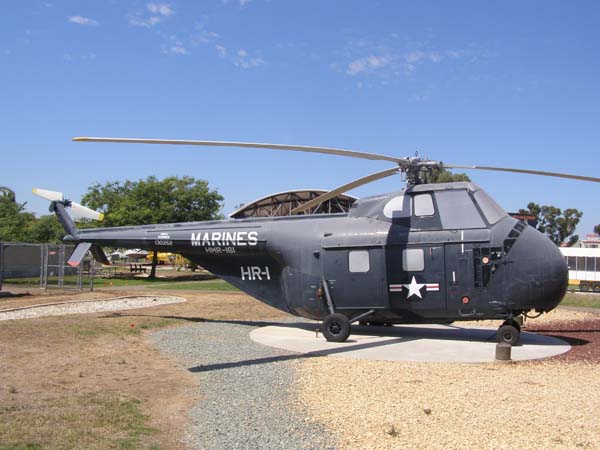