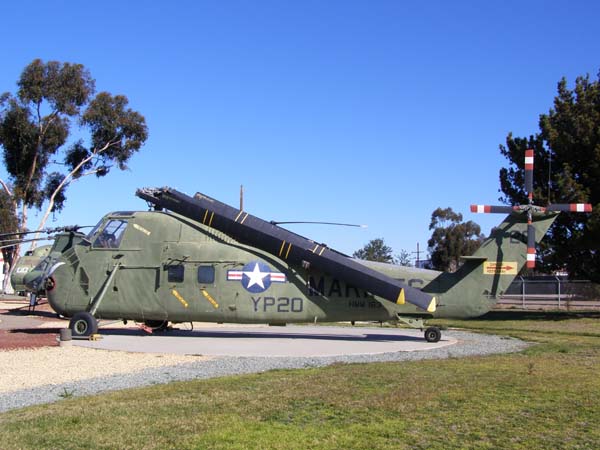 Beginning in 1962, the H-34 served as the primary Marine Corps assault helicopter of the Vietnam War until its replacement by the turbine-powered CH-46. It began service in 1952 as a Navy anti-submarine warfare helicopter evolved from the Sikorsky S-55 series.

Initially designated as the HSS-1, it went on to see significant service in the combat assault and utility roles with the Army and Marine Corps.

The Sikorsky H-34 is a piston-engined helicopter originally designed by American aircraft manufacturer Sikorsky as an anti-submarine warfare (ASW) aircraft for the United States Navy. Roles included utility transport, anti-submarine warfare, search and rescue, and VIP transport. In its standard configuration, transport versions could carry 12 to 16 troops, or eight stretcher cases if utilized in the MedEvac role, while VIP transports carried significantly fewer people in much greater comfort. It was the last piston-engined helicopter to be operated by the United States Marine Corps, having been replaced by turbine-powered types such as the UH-1 Huey and CH-46 Sea Knight. A total of 2,108 H-34s were manufactured between 1953 and 1970.

Its higher availability and reliability due to its simplicity compared to the newer helicopters led Marines to ask for it by name for use during the Vietnam War. The phrases “give me a HUS”, “get me a HUS” and “cut me a HUS” entered the U.S. Marine Corps vernacular, being used even after the type was no longer in use to mean “help me out”.

USMC H-34s were also among the first helicopter gunships introduced into theatre, being fitted with the Temporary Kit-1 (TK-1), comprising two M60C machine guns and two 19-shot 2.75 inch rocket pods. The operations were met with mixed enthusiasm, and the armed H-34s, known as “Stingers” were quickly phased out. The TK-1 kit would form the basis of the TK-2 kit used on the UH-1E helicopters of the USMC.

On September 7, 1957, President Dwight D. Eisenhower was vacationing at his summer home in Newport, Rhode Island, when his immediate presence was needed at the White House. Col. Virgil D. Olson of Marine Helicopter Squadron ONE (HMX-1) and his crew were ordered to fly the President in their HUS-1 across Narragansett Bay to the waiting Air Force One. HMX-1 continued to fly the President in the HUS-1 until it was replaced by the VH-3A Sea King in 1962. This aircraft is on loan from the National Museum of the Marine Corps.

UH-34D (BuNo 150219) was accepted by the Marine Corps on December 21, 1962 at the Sikorsky factory in Stratford, CT and assigned to the Purple Foxes of HMM-364. It was flown across country to its new base at MCAF Santa Ana. In September 1963 it deployed with HMM-364 to MCAS Futenma, Okinawa. In December 1963 it was transferred to the Flying Tigers of HMM-361 where they remained at Futenma until they were sent aboard the USS Valley Forge (LPH-8) for combat operations off Vietnam. ‘219 returned to the Purple Foxes aboard USS Iwo Jima (LPH-2) with continued combat operations off Vietnam. In December of 1964 it was transferred to the Ridge Runners of HMM-163 and returned to MCAS Futenma. It went in for maintenance at the depot at NAS Atsugi, Japan. After a short stay with Headquarters and Maintenance Squadron 16 back at MCAS Futenma, ‘219 was sent to Danang, Vietnam for duty with HMM-162 (Golden Eagles), HMM-365 (Blue Knights), and HMM-161 (Greyhawks). In December 1966 it moved to Marble Mountain Air Facility near Da Nang with the Flying Tigers of HMM-361 and the Thunder Chickens of HMM-263. After another maintenance period in NAS Atsugi it joined the Lucky Red Lions of HMM-363 in December 1967 aboard USS Okinawa (LPH-3). HMM-363 then deployed to Phu Bai, Vietnam in May 1968. ‘219 stayed on in Phu Bai with the Ugly Angels of HMM-362. The squadron would fly the last combat missions of the UH-34 “Huss” and on August 18, 1969 they held a ceremony at Phu Bai marking the end of its combat role. ‘219 was then flown to Da Nang to be shipped back to NAS Alameda where it was stored then stricken from inventory in February 1972. In 6 ½ years it flew with 12 squadrons totaling 4,124 hours, almost all in combat conditions. 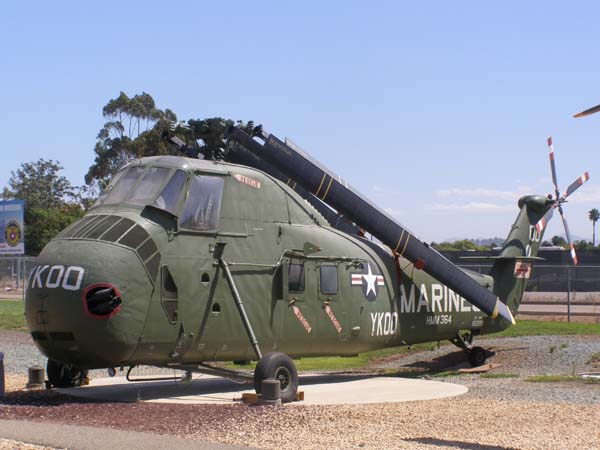