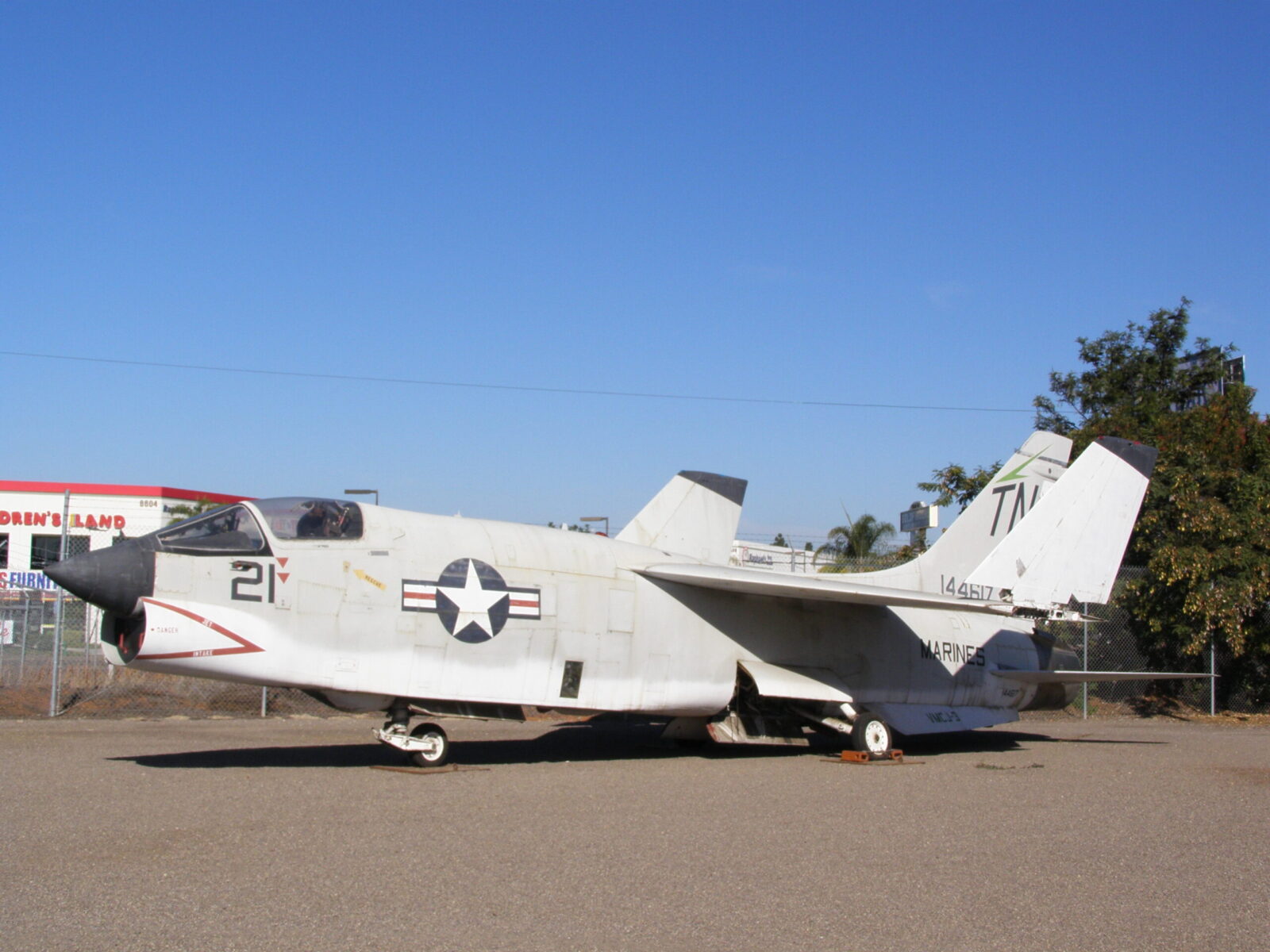 The F8U-1P was the unarmed photographic reconnaissance version of the F8U-1 fighter. The F8U-1P differed from the F8U-1 in having the lower half of the forward fuselage squared off to enable the installation of three 3-D topographic imaging cameras, and two vertical cameras. The internal cannon, the rocket pack, and the fire control radar were all removed.

The horizontal tail was reduced to increase the aircraft’s speed. The engine was the same J57-P-4A which powered the F8U-1. The first F8U-1P flew on December 17, 1956.

In July of 1957, an attempt was planned to break the coast-to-coast speed record from California to New York. A F8U-1P (BuNo 144608) flown by then Marine Corps Major John H. Glenn would fly across the entire United States, using its cameras to photograph the terrain along his route. The flight was named Project Bullet and was to be supported by AJ-2 Savage aerial tankers. On July 16, he took off Los Angeles and landed at Floyd Bennett Field in New York, with an average speed of 725.25 mph. For this feat, Major Glenn was awarded the Distinguished Flying Cross.

It was to be in the Cuban missile crisis of October 1962 that the RF 8A was to prove its worth. Florida-based RF-8As of VFP-62 were to fly repeated missions over Soviet missile sites that were in preparation on the island of Cuba, providing evidence of their existence and monitoring the progress of their crews in getting them operational. Code-named Blue Moon, these flights began on October 23. Two flights were made daily from NAS Key West, with low-level high-speed dashes being made over Cuba. They returned to NAS Jacksonville, where their film was downloaded. They then returned to Cecil Field for maintenance, and then back to Key West for the next missions. VFP-62 did not have enough RF-8As to meet the demanding Blue Moon flight schedule so they requested augmentation by 4 VMCJ-2 aircraft. The 2nd Marine Aircraft Wing commander advised the Navy that they would get the 4 RF-8As but they would come with Marine pilots! The four VMCJ-2 RF-8As were updated with the latest Chicago Aerial forward firing panoramic cameras with image motion compensation by a contractor team just days before joining VFP-62 in Key West. Perhaps the most memorable moment on the Cuban Missile Crisis was on 25 October when our UN ambassador showed the low level pictures of the near operational missile sites to the Soviets and the world on TV. The four Marine pilots, Captains E.J. Love, John Hudson, Dick Conway and Fred Carolan received Distinguished Flying Crosses for their missions along with their Navy counterparts.

F8U-1P BuNo 144617 was the 12 th Photo Crusader built by Chance Vought. It was accepted by the U.S. Navy on December 17 th , 1957 at the factory in Dallas, TX and delivered VFP-61 at NAS Miramar. It was part of the first F8U-1P carrier deployment when it sailed with VFP-61 DET A aboard USS Midway (CV-41) in August, 1958. Upon its return, ‘617 was sent back to the factory for 3 months of depot level maintenance. In October 1959 it was transferred to the Marine Corps and VMCJ-3 at MCAS El Toro. In November 1965 after six years (including a designation change to RF-8A) and nearly 1,100 hours of flight time it was sent back to the Vought factory in Dallas to be converted to a “G” model. The modifications included a J57-P- 22 engine rated at 10,700 lb.s.t. dry and 18,000 lb.s.t. with afterburner. They were also equipped with the ventral fins of later Crusaders and were provided with improved navigation and electronic equipment. In addition, they were equipped with underwing hardpoints for drop tanks, and four cameras mounted in the fuselage reconnaissance bay. On April 3 rd , 1966 it left Dallas for NAF Johnsville in Warminster, PA and spent the next 4 ½ years as a test project chase plane for the Naval Air Development Center. It then joined the Naval Reserve and VFP-206 at NAF Washington, D.C. During its 3 ½ year stint with the “Hawkeyes”, it deployed aboard USS John F. Kennedy (CV-67). On June 20th , 1973 it went into storage at Davis Monthan AFB “boneyard”. 5 ½ years later it was pulled out of storage and after six months of refurbishment at the Dallas factory, it was sent to VFP-63 at NAS Miramar. In a busy two years, ‘617 deployed with VFP-63 DET 3 aboard USS Constellation (CV-64) and VFP-63 DET 2 aboard USS Coral Sea (CV-43). After another 6 month depot period in Dallas, it returned to VFP-206 at NAF Washington on February 9 th , 1982. On December 3rd , 1984 it was placed back in storage. On January 10 th , 1986 it was pulled back out of storage by the Research, Test, Development and Evaluation program in Columbus, OH and quickly loaned with another RF-8G to Rockwell International for use as a chase plane during its X-31 Enhanced Fighter Maneuverability program flight phase at Edwards AFB, CA. The program concluded in 1992 with one RF-8G retiring at Edwards, and our aircraft flown to MCAS El Toro and the Flying Leathernecks Aviation Museum, making this the last Photo Crusader to fly.