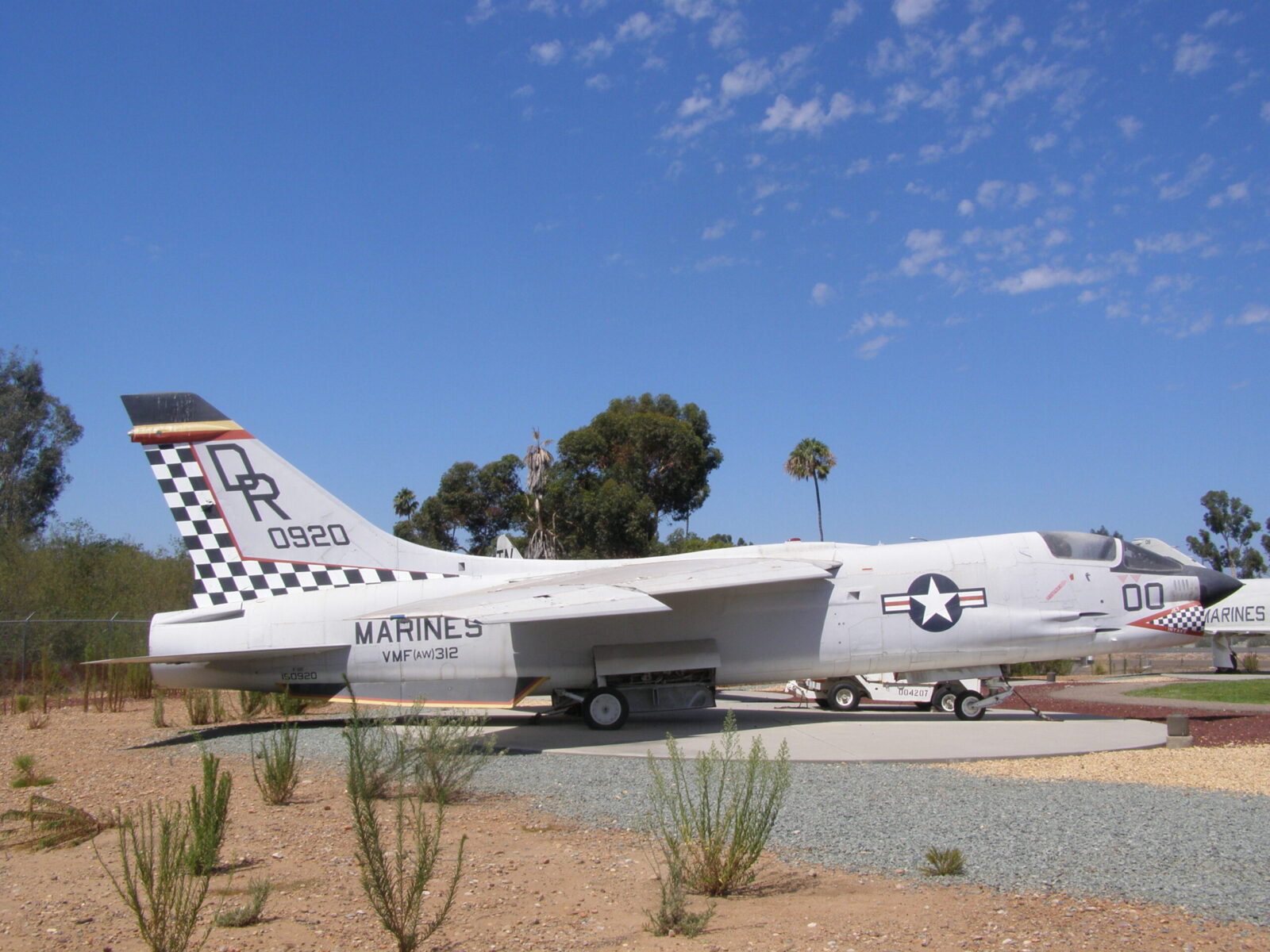 The Vought F8U Crusader (renamed F-8 in 1962) is a single- engine, supersonic, carrier-based air superiority jet aircraft built by Vought for the United States Navy and Marine Corps (replacing the Vought F7U Cutlass). The F-8 served principally in the Vietnam War. The Crusader was the last American fighter with guns as the primary weapon, earning it the title “The Last of the Gunfighters”.

The F8U Crusader is unique in providing a two-position, variable incidence wing which pivoted by 7° out of the fuselage on takeoff and landing. This allowed a greater angle of attack, increasing lift without compromising forward visibility.

The last “new production” Crusader for the US Navy was the F8U 2NE, which initially flew at the end of June 1961. This variant was strongly enhanced for the strike role through the addition of two removable underwing pylons for Zuni rocket packs, AGM-12 Bullpup air-to- surface missiles, bombs and other stores. This upgrade also included an improved search and fire-control radar for enhanced all weather operation. 286 F8U-2NEs were built in all.

F-8E BuNo 150920 was accepted by the U.S. Navy on July 16th
1964 and delivered to “The  Hunters” of VF-162 at NAS Miramar. On April 5, 1965 it set sail for Vietnam aboard USS Oriskany (CVA-34) and returned to NAS Miramar on December 16 th ,1965. On May 26th, 1966 it deployed again to Vietnam with VF-162 aboard the Oriskany. Its deployment was cut short on August 2nd , 1966 when it was off-loaded at NAS Atsugi, Japan for major repairs. The repairs were completed near the end of October 1966 and it was transferred to the Combat Operational Support Activity (COSA) Atsugi awaiting a new assignment. On January 3 rd , 1967 it was sent to the “Satan’s Kittens” aboard USS Ticonderoga (CV-14) as a replacement aircraft and again sailed to waters off Vietnam to fly combat missions against North Vietnam. When the Ticonderoga returned to San Diego on May 29,1967 ‘920 was offloaded and transferred to the Naval Air Rework Facility (NARF) North Island. In October 1967 it was sent back to the Vought factory in Dallas for upgrades to the “J” version. The modifications included greater slat and flap deflection to significantly increase wing lift due and the addition of a boundary layer control system. Also installed were “wet” pylons for external fuel tanks, J57-P-20A engine and the AN/APQ-124 radar. A total of 136 aircraft were rebuilt to this standard. In August 1968, upon completion of the upgrades it was sent to the Pacific Missile Center at NAS Point Mugu, CA. It returned to NAS Miramar in March 1973 with the Fighting Checkmates” of VF-211. On January 19 th , 1975 it returned to VF 191 when VF-211 began its transition to the F-14A Tomcat. On September 16 th , 1975 it deployed with VF-191 on the USS Oriskany’s last WESTPAC cruise. It returned to NAS Miramar on March 3rd , 1976. One week later it was flown to the boneyard at Davis Monthan AFB when VF-191 began its transition to the F-4J Phantom II. ‘920 was struck on August 31 st , 1984. It was then moved to MCAS El Toro where it served as a gate guard. This aircraft is painted in the colors of the Checkerboards of VMF(AW)-321. It is on loan from the National Museum of the Marine Corps. 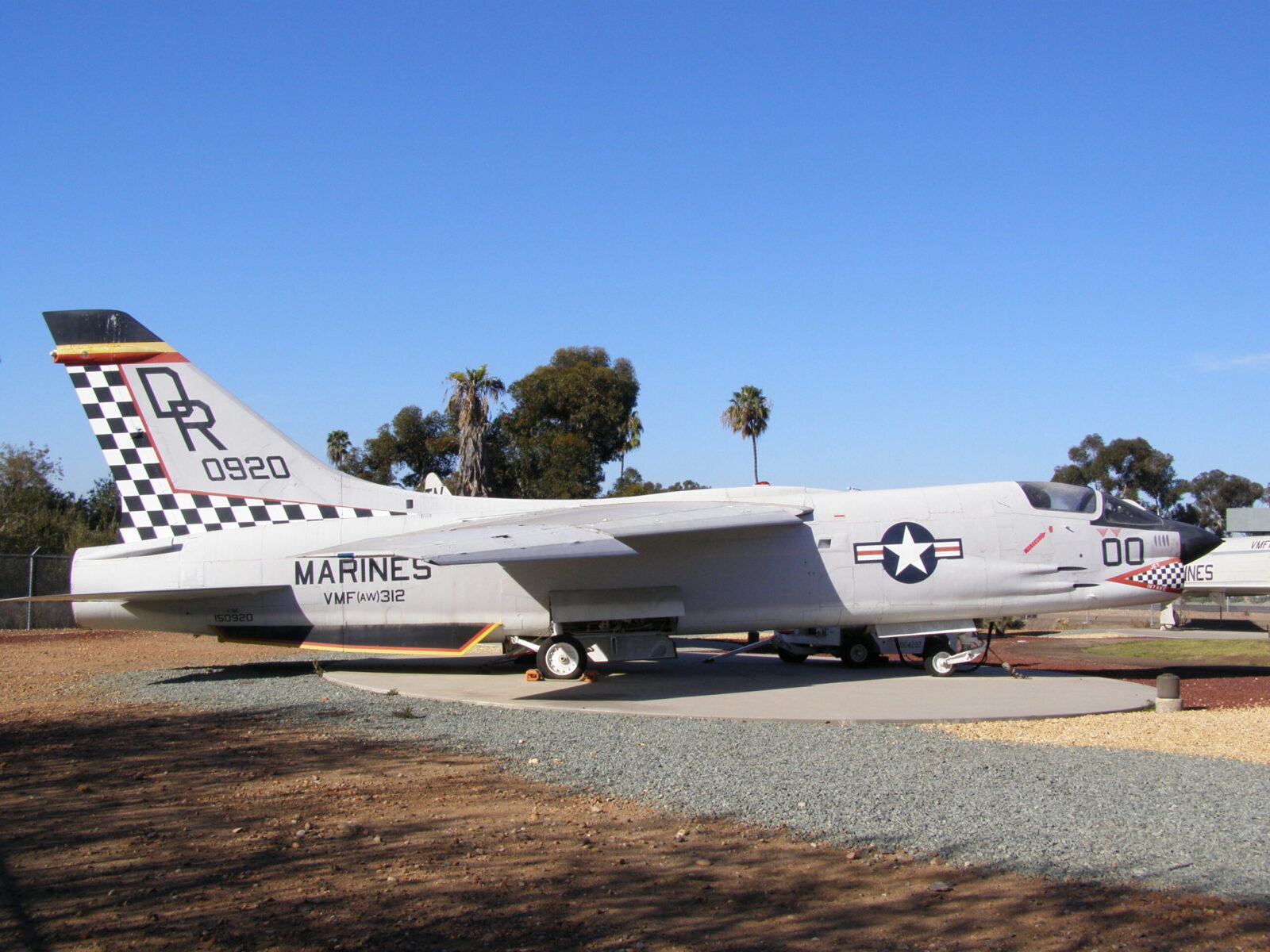