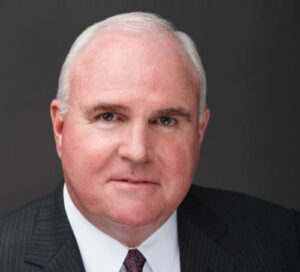 In 2009, Colonel Patrick “Paddy” Gough successfully completed a distinguished 30-year career with the
U.S. Marine Corps. He served as the Commanding Officer of Marine Light/Attack Helicopter Squadron￾169 as well as Marine Aircraft Group-39, and as the Deputy Commander of Marine Corps Installations West, accumulating approximately 4000 flight hours in peace and combat operations. He completed eight overseas deployments, four of which were in combat, and has earned numerous military awards and decorations for operational excellence, leadership, individual accomplishment, and the achievement of safety milestones.

Upon retiring from the Marine Corps, he attained six years of corporate experience as the Executive
Director of Human Resources and Organizational Development for Orange County Transportation
Authority (OCTA). During his time at OCTA, he also served as the interim Deputy CEO and CEO, as well as holding several committee leadership positions within the American Public Transportation Association. He became the Vice President of Human Resources for PKL Services, Inc. (PKL) in 2014. In 2015, he was promoted to Chief Operating Officer (COO). In February 2020, he was promoted to Chief Executive Officer (CEO) at PKL. In 2022, he created Poseidon Consulting LLC and serves as CEO/Founder. He also provides his knowledge and expertise to companies and organizations as a member of Advisory Boards and Boards of Directors. He is a full equity partner in a newly formed international business brokerage firm.