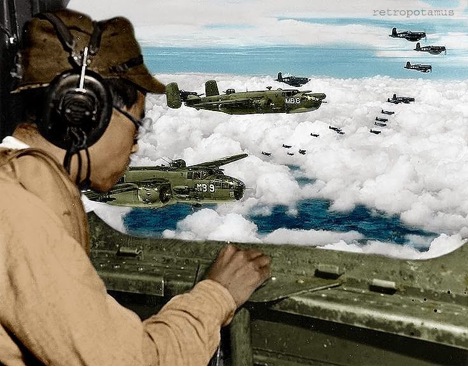 On August 9, 1945, Nagasaki was devastated by the second atomic bomb attack on Japan during World War II. The attack by the B-29 ‘Superfortress, “Bockscar,” piloted by Major Charles W. Sweeney, was followed only a day later by a truly unique episode of World War II. 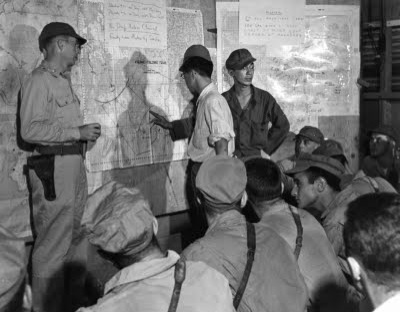 On August 10, 1945, with Japan’s surrender just days away, a flight of Marine aircraft took to the skies and attacked entrenched Japanese positions on the Philippine island of Mindanao. In the lead plane, directing the Marines was a captured Japanese officer, Lieutenant Minoru Wada, locating targets and pointing out positions in the thick jungle. This event was the first, and only time, during the war that a Japanese Imperial Army officer served as part of an American combat flight crew.

The events of August 10, 1945 were unique in their own right, but were only possible because of events that occurred much earlier in the Pacific war. Some background information is necessary to fully understand the circumstances that led to Lieutenant Wada’s assistance to the US Marines conducting aerial combat operations on Mindanao.

By June 1945, MacArthur’s command had successfully fought a lengthy campaign to remove the Japanese forces from the New Guinea/Papua area, thus freeing Australia from potential invasion. Philippine Islands were the next to be retaken. Shortly thereafter, MacArthur moved his headquarters to Manila. On June 21, 1945, the Battle for Okinawa was over. By August, MacArthur’s USAAF units under General George C. Kenney’s command had already moved their headquarters to Okinawa. Army Air Forces in the Pacific were now focused on bombing the Japanese homeland. 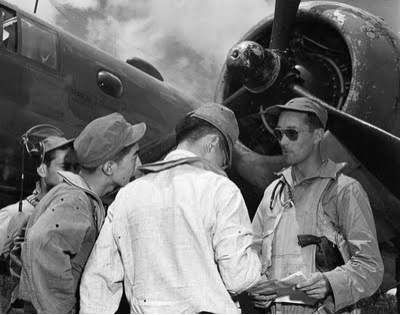 One of these bypassed holdouts was the Imperial Japanese Army’s 100th Division, commanded by General Jiro Harada.[1] Although severely reduced in strength, it remained entrenched on the island of Mindanao. Opposing Harada’s forces were the United States Eighth Army and Allied forces under the command of General Robert L. Eichelberger. His forces were given the task of destroying all remaining Japanese defenses and completing the island’s liberation. In dealing with Harada’s remaining forces, Eichelberger was supported by the First Marine Aircraft Wing (1st MAW).

The 1st MAW became famous as the first Marine aviation unit to arrive on Guadalcanal in August 1942 and was the genesis of the island’s famous Cactus Air Force. By 1945, the focus of the 1st MAW was guard duty of the Solomon Islands. Major General Ralph J. Mitchell, 1st MAW commander from April 1943 to June 1945, was tired of his men being relegated to heckling bypassed Japanese garrisons and had been pressing superiors to have at least some of his squadrons participate in the Philippine campaign. With the campaign in the Western Pacific moving to the Philippines, ground based Marine aviation resources to include the 1st MAW were transferred to MacArthur’s 5th Air Force under General Kenny’s command.[2]

Halsey’s “awareness” prompted him to contact MacArthur, and the role of ground based Marine aviation in the Western Pacific campaign began to change, especially for Marine Bombing Squadron 611 (VMB-611) of Marine Air Group-32. VMB-611, flying PBJ Mitchell bombers would become the only PBJ squadron to operate in the Philippines during the war. By April 1945, both VMB-611 and MAG-12 Corsair squadrons were flying from airfields on Zamboanga, a peninsula projecting from the west side of Mindanao.

VMB-611was commissioned October 1, 1943 at MCAS Cherry Point, North Carolina, as a PBJ-1 Squadron with Captain Prescott D. Fagan in command. Originally assigned to MAG-61, the squadron was transferred to MAG-32 when ordered to the Philippines.

VMF-115 (“Joe’s Jokers”), was organized on July 1, 1943 at Marine Corps Air Station Santa Barbara, California, as an F4U Corsair squadron and Major Joseph Foss assumed command later that month. In late 1944, just before the squadron’s move to the Philippines, Major Foss’ “ever present malaria attacks” forced him to relinquish command and return to the States.

As American troops made progress in eliminating pockets of bypassed Japanese units on Mindanao, they captured a number of Japanese soldiers. Among POWs was Second Lieutenant Minoru Wada. Wada had been with the 100th Division for over a year, and had served as a transportation officer. He had excellent knowledge of the island and its terrain.

Lieutenant Wada is somewhat of an enigma. Beyond the events of August 10th, 1945, very little is known about his personal history. Although born in the United States, Wada returned to Japan before the war to pursue his education. He was educated at the University of Tokyo and eventually attended the Kyushu Military Academy. When pressed into military service, Wada began to think deeply about the nature of the war. As Japanese losses mounted, he became disillusioned and loathed the conflict.

After his capture, Marine Corps intelligence officers interviewed Wada extensively. In the course of these interrogations, Wada admitted “he had never been convinced his country should have started the global conflict they did…and he would do anything, even sacrifice his own life to stop the war and bring ultimate peace to the people on the Japanese home islands.”  Furthermore, Wada believed “[the Japanese] generals and admirals, the old tough military, forced this war on the people… [and that] the common Japanese person does not want war.” While the nature of Wada’s capture raised some suspicion with the Americans, he eventually convinced his interrogators that he wanted the war to end as soon as possible and looked forward to a peaceful future.

In early August, American forces were trying to rout out the remaining elements of the Japanese 100th Division. This was no easy task. Japanese troops were entrenched in thick jungle and steep hills the terrain on this part of Mindanao, which provided good hiding places for the Division’s troops.[3] At some point, Marine interrogators suggested to Lieutenant Wada that he might be of help in locating his unit’s headquarters and disrupt their command and control structure.

Initially repulsed by the request, Wada eventually reasoned that if he could assist the Americans here on Mindanao, many more lives might be saved overall and the war may come to a close even faster. With this reasoning in mind, Wada agreed to help the Americans dislodge his former command. Looking for a way to break Japanese resistance in the jungle mountains of Mindanao, Wada’s information was keenly welcomed.

During the pre-flight briefing, Wada pointed out Japanese positions on maps and pointed out the location of potential targets. After the briefing, he flew in the lead PBJ piloted by Major Sidney Groff.

Sitting in the radio-gunners compartment aboard the lead bomber, Wada had an excellent view of the airstrike. Because Wada spoke very little English, Gunnery Sergeant Charles Imai was assigned to relay Wada’s instructions to the flight crew. When Imai translated Wada’s instructions, he passed the information to the air strike coordinator, Major Mortimer H. Jordan. Major Jordan was aboard the same bomber, but seated in the nose compartment. Once Imai passed the information to Jordan, he then radioed that information to the strike aircraft.

According to Major Jordan, Wada identified a number of critical targets and his navigation to those targets was very accurate. With Wada’s help, the Marines pounded the target area with napalm, fragmentation bombs, rockets and heavy machine gun fire. Jordan reported “the Japanese officer put us zero on the target and we did the rest…maybe [we] overdid it.” After several tons of bombs were dropped, the battle damage assessments concluded that the 100th Division’s command capability was destroyed.

After the mission, Wada was naturally melancholy, but did not express any regret over his actions. Watching the Marines conduct the air raid, Wada was impressed with the flying skill of VMB-611 and stated “you clazy six er-reven Malines pletty good fryers.” 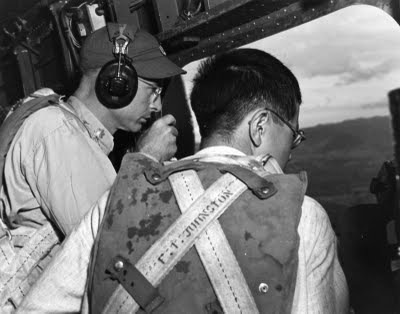 Ultimately, Lieutenant Minoru Wada was a minor participant in the Second World War, and most of his activities during the conflict have been lost to history.  However, upon returning from the mission of August 10th, several Marines reported that Wada appeared to be happy and at peace with what he had done. Marines that participated in this raid believed Wada was happy because he had accomplished something he believed to be important in his life – making a contribution to the end of the war.

After the mission on August 10th 1945, Lieutenant Wada became a man without a country. He was given a new identity and appearance by the Allies to protect him from retribution. What happened to Wada from that point forward remains unknown. The records of the events of that day remained classified for over 35 years, and even to this day do not appear in any official historical records of the US Marine Corps.

[1] Part of the Imperial Japanese 35th Army, the 100th Infantry Division was activated in early 1944 on the island of Mindanao.  Consisting of crack Japanese troops, with significant combat experience, the 100th Division was tasked with repelling the American invasion “at all costs.”

[2] During the Korean War, Marine Corps ground based aviation forces were again under command of the USAF’s 5th AF.

[3] The headquarters elements of Wada’s 100th Division were located in the mountains near the Kibaw-Talomo Trail, running northwest from the city of Davao.